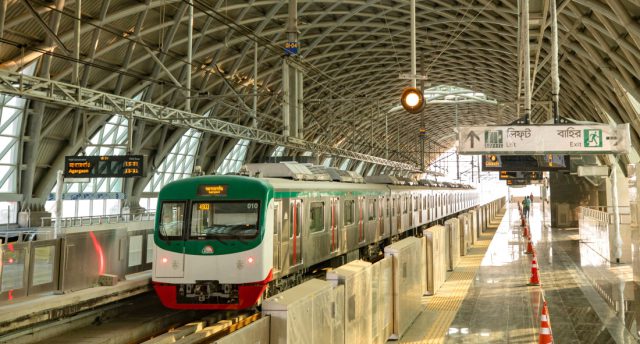 “Metro rail is another achievement of Bangladesh,” the premier said opening the 11.73 km part of the Mass Rapid Transit (MRT) Line-6 of the metro rail project from Diabari to Agargaon by unveiling its plaque at Diabari in the city on Wednesday (28 December).

Total of 200 people including ministers, government officials, diplomats, and freedom fighters among others joined the premier on the maiden metro rail journey. The train carrying the PM and her entourage left from Diabari station on Wednesday at noon.

“Bangladesh and the Bengali nation have gained prestige all over the world by building the Padma Bridge with its own funding,” PM Hasina said, adding, “The people gave Awami League an opportunity to serve by voting for the boat symbol. I thank everyone for that.”

The premier inaugurated the operation of the first phase of the project– Uttara to Agargaon from Uttara sector-15 playground. She took the first official ride from Diabari of Uttara to Agargaon after buying a ticket. Marking the occasion, she also unveiled a commemorative stamp and a banknote.

“This shows the advancements made and developments achieved by Bangladesh in recent times.”

Mariam Afiza, who became the first metro train operator of the Mass Rapid Transit line-6 today, said, “We are very excited. I feel proud and honoured to have Prime Minister Sheikh Hasina on board as the country witnessed its first-ever metro ride.”

“The metro trains that are being used in the country are sophisticated machines. They are very safe to use and are equipped with many advanced technologies,” she added.

“Today is a very happy day, a day when the long-time dream of the people of the capital came true,” Road Transport and Bridges Minister Obaidul Quader said during the inauguration programme.

Bangladesh is the third country in South Asia to operating a metro rail service – being a late starter in the expensive and complicated venture compared to neighbouring India which got its first metro commissioned in 1984 in Kolkata. Pakistan started its first metro in Lahore just two years ago.

Mariam Afiza will be the first operator of the metro train as the general people can start riding it from Thursday (29 December).

Initially, the metro train will run from 8 am to 12 noon every day from Uttara to Agargaon stations without any stoppage. State-owned Bangladesh Road Transport Corporation (BRTC) will operate 30 double-decker buses to transport passengers from and to metro rail stations.

The InCAP - November 30, 2022 0
A three-day long first-ever Bangladesh International Travel and Tourism Expo (BITTE) is scheduled to kick off in Dhaka from December 1 to boost the...
Go to mobile version