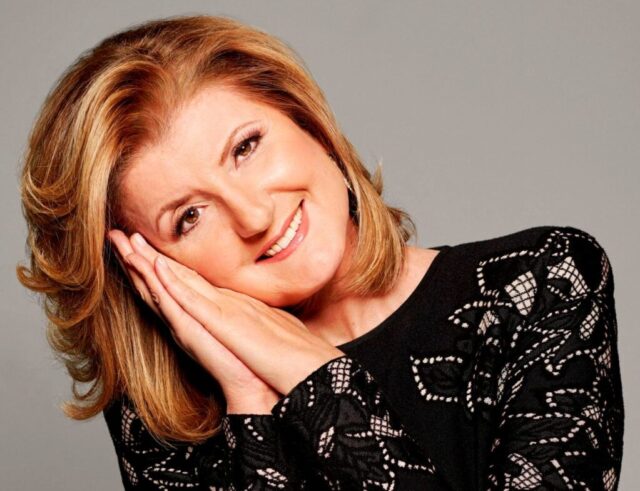 Arianna Stassinopoulos Huffington (born Ariadni-Anna Stasinopoulou, Greek: Αριάδνη-Άννα Στασινοπούλου, July 15, 1950) is a Greek-American author, syndicated columnist, and businesswoman. She is the founder of The Huffington Post, the founder and CEO of Thrive Global, and the author of fifteen books. In May 2005, she launched The Huffington Post, a news and blog site. In August 2016, she launched Thrive Global, a corporate and consumer well-being and productivity platform.

Arianna Huffington has been named to Time Magazine’s list of the world’s 100 most influential people and the Forbes Most Powerful Women list. Originally from Greece, she moved to England when she was 16 and graduated from Girton College, Cambridge, where she earned a B.A. in economics. At 21, she became president of the famed debating society, the Cambridge Union. She serves on numerous boards, including Uber, Onex, and Global Citizen.

Her last two books, Thrive: The Third Metric to Redefining Success and Creating a Life of Well-Being, Wisdom, and Wonder and The Sleep Revolution: Transforming Your Life, One Night At A Time, both became instant international bestsellers.

Huffington, the former wife of Republican congressman Michael Huffington, co-founded The Huffington Post, which is now owned by AOL. She was a popular conservative commentator in the mid-1990s, after which, in the late-1990s, she offered liberal points of view in public, while remaining involved in business endeavors. In 2003, she ran as an independent candidate for governor in the California recall election and lost. In 2009, Huffington was No. 12 in Forbes’s first-ever list of the Most Influential Women In Media. She has also moved up to No. 42 in The Guardian’s Top 100 in Media List. As of 2014, she is listed by Forbes as the 52nd Most Powerful Woman in the World.

Here are some Arianna Huffington guidelines:

“Give me a place to stand and I will move the world.”

“I think while all mothers deal with feelings of guilt, working mothers are plagued by guilt on steroids.”

“The fastest way to break the cycle of perfectionism and become a fearless mother is to give up the idea of doing it perfectly – indeed to embrace uncertainty and imperfection.”

“There’s no love more intense than the love we have for our kids – and where there is intense love, there is also intense fear lurking beneath the surface.”

“We need to accept that we won’t always make the right decisions, that we’ll screw up royally sometimes – understanding that failure is not the opposite of success, it’s part of success.”

“It would be futile to attempt to fit women into a masculine pattern of attitudes, skills, and abilities and disastrous to force them to suppress their specifically female characteristics and abilities by keeping up the pretense that there are no differences between the sexes.”

“Liberation is an ever-shifting horizon, a total ideology that can never fulfill its promises. It has the therapeutic quality of providing emotionally charged rituals of solidarity in hatred – it is the amphetamine of its believers.”

“Our current obsession with creativity is the result of our continued striving for immortality in an era when most people no longer believe in an after-life.”

“Don’t just climb the ladder of success – a ladder that leads, after all, to higher and higher levels of stress and burnout – but chart a new path to success, remaking it in a way that includes not just the conventional metrics of money and power, but a third metric that includes well-being, wisdom, wonder, and giving, so that the goal is not just to succeed but to thrive.”

“Meditation is not about stopping thoughts, but recognizing that we are more than our thoughts and our feelings.”

“Treat people like family, and they will be loyal and give their all.”

“You need to be able to nurture yourself in order to be a good mother, good at your job, good at servicing your community. I really believe women can do it all, but they can’t do it all at the expense of their health, their sleep, and their sense of well-being.”

“Why do we spend so much of our limited time on this earth focusing on all the things that our eulogies will never cover?”