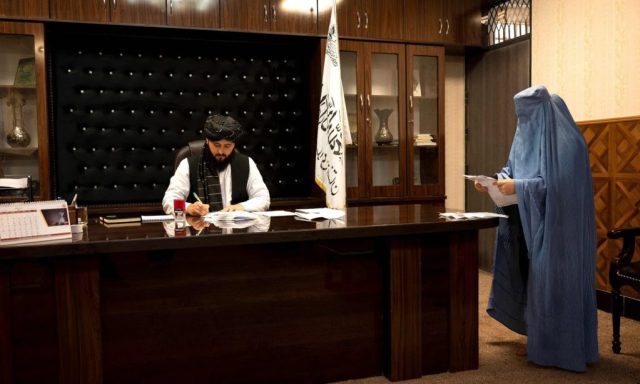 Damullah Mohibullah Mowaffaq, the new mayor of Maymana, the city in Afghanistan, attempts to generate goodwill from war-weary people as he strolls across the town. Only 25-year-old Man, top former Taliban sniper becomes mayor.

However, until last summer, he had a reputation as one of the Taliban’s greatest shooters, waging a battle to gain control of the nation. Then, in November 2021, Mowaffaq was appointed mayor of Maymana, the seat of Faryab province in northwest Afghanistan, three months after the Taliban overthrew the Western-backed government and took power.

He came to popularity as a warrior, but now his days are filled with the mundane responsibilities of municipal governance, such as unclogging sewers, designing roadways, and resolving neighbor disputes. His shift mirrors the Taliban’s more incredible transition as they struggle to manage territory. “My aims were quite explicit when I was fighting: to stop the foreign occupation, prejudice, and injustice. At this point, my goals are likewise clear: to combat corruption and help the country develop,” the 25-year-old told The Alliance for Peacebuilding (AfP).

Residents of the 100,000-person city come forward with complaints and ideas duly put to a never-ending to-do list. “The new mayor is young, well-educated, and most importantly, from the city,” adds Sayed Ahmad Shah Gheyasi, his non-Taliban deputy.

Mowaffaq hailed from a wealthy family and grew up in Maymana, where he excelled in school and sports. He was promoted to head a small unit deployed in Faryab province after joining the insurgency at 19 only. Others have described him as one of the Taliban’s most skilled shooters, despite his aversion to sharing battle experiences. He pauses in front of a home blemished with munition scars in the village of Doraye Khoija Qoshre, where his battalion formerly held control, while on a walkabout with AfP.

He used to hide out here, scoping out American troops with his gun and polishing his reputation as a master marksman. Although it is impossible to say whether Mowaffaq is to blame, the US stated in mid-2019 that a member of their special forces had been killed in battle in Faryab. Maymana was “practically under siege” a year ago, according to the Afghan Analysts Network, due to “an extensive Taliban presence.”

Mowaffaq saw several of his colleagues murdered in battle, but he refused to talk about the atrocities he committed and endured. “I’ve had a lot of ups and downs,” he admits. Since taking control in August, the United Nations and human rights organizations have accused the Taliban of serious human rights violations.

The country’s new authorities have been accused of murdering over 100 former government or security forces personnel, while women activists have been jailed and journalists assaulted for documenting their rallies. Mowaffaq’s visage may be framed by the Taliban ideal of a thick beard and black turban, but he is an outlier of their austere beliefs in many respects. For example, Islamists have virtually evicted women from the public sphere across the country, with older girls being denied education and the opposite sex being largely barred from the workplace.

Female employees in Mowaffaq’s office, on the other hand, have been permitted to continue working, and a public garden in the city has been set aside for them. Women were required to wear the all-covering burqa under the first Taliban government, which lasted from 1996 to 2001.

This time, religious police have refrained from issuing a decree; however, they have ordered women in the capital to cover their faces. “Nobody instructs us how to dress,” said Qahera, the mayor’s 26-year-old female director of human resources, who wears a hijab by existing dress codes. Even the Taliban’s members were taken aback by the movement’s quick seizure of Afghanistan.

Inexperience, brain drain, a humanitarian catastrophe, and pressure from Western countries with frozen assets have all hampered their efforts to administer the country.

The InCAP Desk - March 29, 2022 0
According to two Afghan airline officials, the Taliban overlords in Afghanistan refused to let hundreds of women board flights, including some overseas, since they...
Go to mobile version