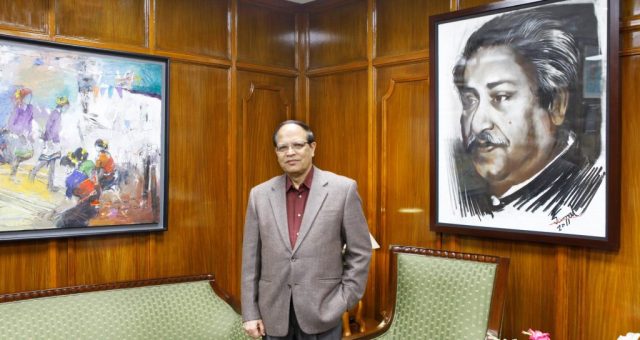 The economic crisis that Sri Lanka has fallen into is undoubtedly tragic. Everyone, including economists, development researchers, and policymakers, is thinking deeply about the situation in Sri Lanka and giving their views. Now, the question can arise, what could be the way out of the crisis and what can be learned from the experience of Sri Lanka. The sad fact is that certain quarters are trying to capitalize on the plight of this beautiful South Asian friend of ours by comparing ‘Apple with Orange’ and questioning the potentiality of Bangladesh. I will not claim that there is no problem in the economic management of Bangladesh.

But we have to admit that there is no room for questioning the strength of our macro-economy. Especially since 2009, as every indicator of macro and microeconomics, Bangladesh has bravely crossed the global financial recession and the last coronation period and is on the path of possibility. Although there are challenges, the potential is huge. Therefore, the discussion must proceed by acknowledging that the economic realities of the two countries and the prospects for the future are not one, and the strengths and weaknesses of the two economies differ.

Sri Lanka was supposed to be the second Singapore in South Asia. Despite a deadly civil war for nearly 26 years, the economy grew. GDP per capita increased from $1436 in 2006 to $3,819 in 2014. However, the country now has to pay the price for not being able to develop a culture of spending wisely. In the name of the family system and sectarianism, financial management collapses. Between 2006 and 2012, foreign debt tripled.

Government debt has risen to 119 percent of GDP. Foreign debt is now more than 70 percent of GDP. Debt liabilities are also higher for large non-profit projects such as seaports and airports. Debt repayment goes up to 72% of government revenue. It was expected to return 7 billion dollars in 2022. As a result, the central bank has to print more rupees to avoid default. Following this, inflation is skyrocketing. Thus, under the pressure of double-digit inflation, people’s lives are on the line. Since April 12, the country has declared itself an exceptional defaulter as it will not be able to repay all foreign loan installments. It is undoubtedly shameful and sad. It has never happened before in this region.

A constitutional crisis in 2018, an Easter bombing of churches and luxury hotels in 2019 killed hundreds of people. As a result, Sri Lankan tourists disappeared. Natural disasters such as heavy rains and floods also hit the economy hard. Above all, the sudden explosion of the COVID pandemic has deepened the economic crisis in Sri Lanka. Now the confidence of domestic and foreign investors is low. Rating agencies continue to downgrade Sri Lanka. Undoubtedly, the monetary policy of the government was not prudent. Without any reliable research and advance review, the government has adopted one populist economic policy after another. As a result, international credit agencies can no longer rely on the country’s monetary policy management. And now the trust is completely gone.

However, the biggest crisis is the mismanagement of Sri Lanka’s macroeconomy. As mentioned earlier, the country has taken a high-interest rate bilateral loan (interest rate of more than six percent) without considering the need and the amount of return on investment. As a result, on the one hand, foreign exchange reserves have declined sharply.

On the other hand, public debt has increased in proportion to GDP. The latest reserve position has come down to about 1.9 billion dollars. Initially, Sri Lanka was reluctant to seek help from the IMF and the World Bank. Because the condition for this assistance was to adopt policies related to economic restructuring and liberalization, this had severe short-term effects on the social and political environment of Sri Lanka. Instead, the country turned to regional allies for help. Both India and Bangladesh have come forward to ease some foreign exchange pressures. In addition, the country has sought more support from China.

Besides, the country is now preparing to seek the help of the IMF. Unfortunately, however, the social and political situation in the country has deteriorated to such an extent that the IMF’s “bitter medicine” could not be used to quell public protests in the face of a huge shortage of daily necessities.

In this context, let us now shed some light on the economy of Bangladesh. Bangladesh’s economy has grown steadily for the last twelve to thirteen years, with steady political stability despite the crisis. Bangladesh has the best per capita GDP growth in emerging Asia, surpassing China, Vietnam, and India.

Agriculture, remittances, and exports including RMG are the mainstay of Bangladesh’s economy. Bangladesh is rapidly recovering from the Corona crisis. So the demand for imports is very high. However, the already disrupted supply chain is being further damaged by the Ukraine-Russia war. As a result, the price of fuel oil has skyrocketed. The cost of shipping has increased. So the value of imports till January stood at 50.45 billion. The growth rate was 46.21% from the same period last year.

The rate was even higher in February and March. As a result, the trade deficit widened to 22 billion at the end of February. As of now, there is a huge deficit of 12 billion. So there is pressure on the quality of money. The growth rate of remittances in the middle was negative. Since March, it has returned to a positive trend. Expatriate income on April 1-9 is 7.3% higher than last year. I am confident that this positive trend will gain momentum throughout April.

Apart from that, Eid-ul-Azha will come soon after. Expatriate income will also increase around him. Exports are already on a positive trend. Its growth was 33.41% by March. This rate is expected to increase further this month. If we can make the dollar-taka exchange rates more flexible, then both expatriate income and exports will increase.

And the way we are threatened with retaliation is not correct. Our total liability is 38 percent of GDP. Foreign debt liability is 13 percent. We now have a total external debt of 90.97 billion. Short-term debt is 15.46 billion, about 17 percent of the total debt. Our reserve situation is also intense. Foreign exchange reserves exceed $45 billion. Apart from that, we have received long-term cheap loans from ADB, World Bank, IMF, and other development agencies to recover. Hence, suddenly, Bangladesh can become like Sri Lanka. Anyone can question the motives of those who are making such a fuss. While Sri Lanka has reduced its revenue collection, Bangladesh has collected revenue at the last 15 percent. There is no alternative to tax reform and digitization to speed up the process.

Some people want to compare the situation in Sri Lanka with the loans taken for our mega projects. In this context, I would like to remind you that the per capita debt of Bangladesh is still $292. But it is also true that we need to curb the cost of government projects. Our policymakers are following that path, as can be seen from the information available in the budget for the next fiscal year, citing the government’s finance department.

However, the proportion of the budget as a percentage of GDP is decreasing. As a result, the budget for the coming fiscal year may be reduced from 17.5 percent this year to 15.4 percent of GDP. This two percent reduction makes it clear that our policymakers, being sensitive to the prevailing situation, have not generally followed the path of increasing the size of the budget from one fiscal year to another.

I have said from the beginning that the continuity of our monetary policy formulation and implementation is entirely different from that of Sri Lanka and much more pragmatic. This budget proposal, which is somewhat skewed in terms of overall macroeconomic realities, proves it again. I believe that Bangladesh will walk faster if all the stakeholders work from their respective places while maintaining peace in society and politics.