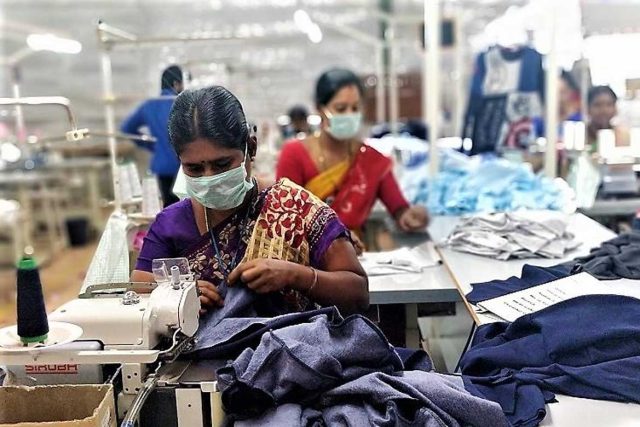 India’s garment factories are now humming at total capacity, after being outperformed in recent years by neighboring Bangladesh and then hammered by the COVID-19 pandemic – a rare labor market bright spot for Prime Minister Narendra Modi and his ruling party as they prepare for an election in 2024.

“We’ve been swamped,” said Parashuram, an Export factory manager who goes by one name, as a group of 60 new female recruits practiced stitching. “We’re always on the lookout for new employees.” The company is looking for land to expand its manufacturing plant in Hindupur, roughly 100 kilometers (60 miles) north of Bengaluru’s tech capital.

If Prime Minister Narendra Modi is to reduce unemployment, sustained success for the textile and apparel (T&A) industry, the country’s second-largest employer after agriculture, is critical.

India’s unemployment rate is above 7%, and it has surpassed the global average in five of the previous six years – a considerable challenge for a country that needs to produce millions of jobs every year merely to keep up with the influx of young people.

With a 4% share of the $840 billion worldwide markets, India is its fifth-largest T&A exporter, while China controls more than a third. India’s exports were on pace with Bangladesh’s a decade ago but have slowed in recent years, particularly in garments, due to increased labor expenses, making Indian clothing 20 percent more expensive.

As global customers strive to diversify their supply chains, Indian T&A companies say they acquire new clients, sell more to existing clients, and increase production capacity. Only India, aside from China, has a big supply chain for everything from cotton to clothes.

Nonetheless, some industry leaders believe it will be difficult for India to outsell Bangladesh unless it signs free trade agreements with Western countries, which New Delhi claims it is working on. Bangladesh also benefits from preferential export terms from many buyers because it is a least developed country.

In recent quarters, Indian firms such as Export, Welspun India, and Raymond – whose customers include Amazon, Target, Costco, Walmart Inc, Tesco, and Macy’s – have increased sales. Over the next five years, Modi wants them to create 1.5 million jobs in the sector.

According to the American Apparel & Footwear Association (AAFA), India’s existing and planned investments have resulted in “more companies looking at India as a possible source of growth over the future years” without specifics.

Uniqlo of Fast Retailing and Gap Inc of Requests for comment were not immediately returned by the companies, which primarily source from India’s largest garment exporter, Shahi Exports.

Harish Ahuja, Managing Director of Shahi Exports, declined to comment on specific purchasers but said demand from established customers was robust. India’s T&A exports increased 52 percent year over year to $30.5 billion, and the government has set a full fiscal-year target of $44 billion, which would be a new high.

According to an industry assessment, whereas worldwide textile exports grew at a compound annual growth rate of 2% between 2015 and 2019, India’s shrank by 0.8 percent. On the other hand, Bangladesh and Vietnam both had double-digit growth. Alleged rights abuses in China’s critical cotton-growing province of Xinjiang, where the minority Muslim Uyghur group lives, are one explanation for the spike in sales for Indian companies to the United States and Europe in recent quarters.

Late in December, U.S. President Joe Biden signed legislation prohibiting imports from Xinjiang. China has denied charges of forced labor or other human rights violations in Xinjiang. According to Reuters, the China Cotton Association stated in December warning of “serious effect” on the country’s cotton textile industry due to the U.S. move.

Raymond, an Indian exporter of men’s suits, jackets, and jeans, said the China factor helped him sign up new clients he had been pursuing for a long time.

“At our existing capacity, we may not be able to take up as many orders as clients want to send out from China,” said Narendra Goenka, chairman of India’s Apparel Export Promotion Council and a founder of family-owned Export.

Goenka said his company would spend $25 million over the next two years to increase capacity by more than a quarter, adding 8,000 jobs to its present staff of more than 10,000. The sector has been a lifesaver for Lopamudra Patel, a 19-year-old from the eastern state of Odisha, whose family struggled to make ends meet on her father’s part-time driver’s salary. She started working at Export a few weeks ago for $100 per month.

“It was quite difficult at home,” she said in the training room, standing next to spinning sewing machines. “I’ll be able to send some money back home now.”

The InCAP Desk - August 28, 2022 0
Lalamove is the Asia-based delivery and courier service provider, has recently established operations in Bangladesh. As per the company, this marks their 11th market...
Go to mobile version