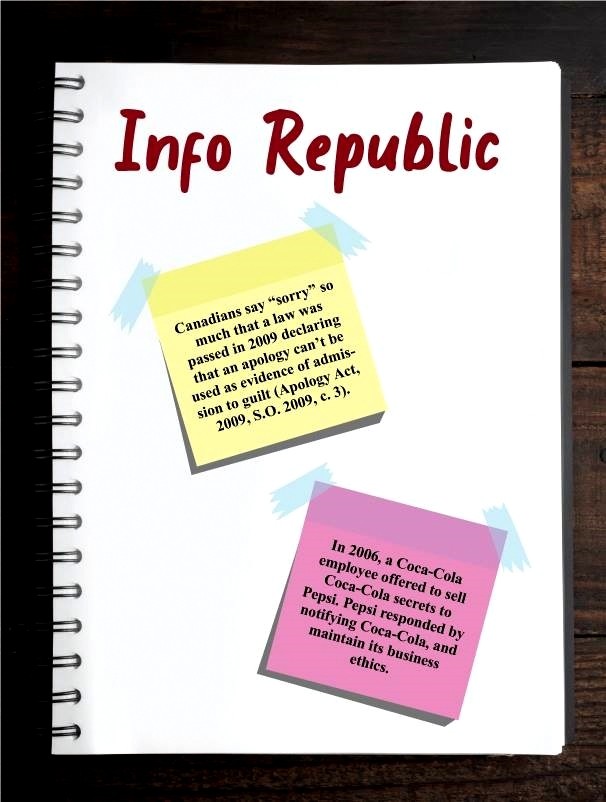 2. In 2006, a Coca-Cola employee offered to sell Coca-Cola secrets to Pepsi. Pepsi responded by notifying Coca-Cola, and maintain its business ethics.

3. The Buddha commonly depicted in statues and pictures, is a different person entirely. The real Buddha was actually incredibly skinny because of self-deprivation.

4. While Apple was building a huge data center in the middle of North Carolina, they wanted to occupy the area of a couple that lived there for 34 years. When the couple refused to leave, Apple paid them $1.7 million dollars for their plot of land, which was only worth $181,700.

5. There is a company in Japan that has schools that teach you how to be funny. The first one opened in 1982. About 1,000 students take the course each year.

6. The Lego Group is the world’s most powerful brand. There are more Lego Minifigures than there are people on Earth.

8. An Italian banker, Gilberto Baschiera is considered a modern-day Robin Hood. Over the course of 7 years, he secretly diverted 1 million euros to poorer clients from the wealthy ones so they could qualify for loans. He made no profit and avoided jail in 2018 due to a plea bargain.

9. There is a company that sells mirrors that make people look 10 pounds thinner. Overall, the mirrors have contributed to 54% of total sales for retailers that use them.

12. “Opposites attract” is a common myth. People are actually attracted to people who look like family members or those with a similar personality type.

13. During WWII, a U.S. naval destroyer won a battle against a Japanese submarine by throwing potatoes at them. The Japanese thought that was grenades.

14. When Shakira was in second grade, she was rejected by the school choir because her vibrato was too strong. The music teacher told her that she sounded like a goat.

15. Non-violent attempts to escape Mexican prisons are not punished because “it’s human nature to want freedom”.

16. There is a correlation between pulling an all-nighter and snapping out of depression. This is because the brain gets more active the longer it goes without sleep.

17. Mona Lisa was stolen from the Louvre in 1911, which drew more visitors to see the “empty space” than the actual painting.

18. Roselle, a guide dog, leads her blind owner down 78 flights of stairs during 9/11. The descent took about an hour and they both safely made it out.

19. A study from Harvard University finds that having no friends can be just as deadly as smoking. Both effect levels of a blood-clotting protein.

From Microbes To Planetary Nebulas

The Economic Impetus Through Social Impact

The InCAP - July 25, 2021
0
In this time and age, we have never seen an unprecedented amalgam of despair and agony. Though we are in a mess...

The Theory of Rational Choice

The InCAP Desk - May 19, 2021
0
After ATM technology, there was no new innovation in the financial technology sector for a long time. Paul Volcker, the former chairman...

Pervasive Autocracy: The Duplication of the Pandemic Changing in to a...

The Stature of Youth Leadership

The InCAP - September 3, 2019
0
Canadian University of Bangladesh and Genex Infosys Limited signs a Memorandum of Understanding (MoU) at the Conference Room of the university on 2 September 2019....

Teachers will be Appointed in 24 Positions by Bangladesh Government

Coordinator Panel - April 21, 2021
0
This Ramadan enjoy The Westin Dhaka’s exquisite Iftar offerings from the comfort of your home. Chef Rimoun Obaid along with The Westin...

The Economic Impetus Through Social Impact