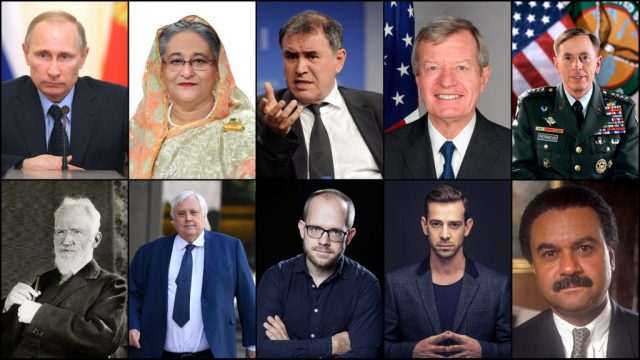 “Indeed, Russia and the U.S. were allies during the two tragic conflicts of the Second and the First World Wars, which allows us to think there’s something objectively bringing us together in difficult times, and I think – I believe – it has to do with geopolitical interests and also has a moral component.”

“Nowadays one country cannot go alone. This is a global village. With neighboring countries, some problems may remain but it can be solved amicably, bilaterally, through discussion.”

“For me, geopolitical issues are becoming more important, because how can you understand the economy if you don’t understand geopolitics? People think economists just deal with spreadsheets and charts. That’s a narrow-minded caricature.”

“I have learned some core lessons along the way. Among the most important, I have become a firm believer that a strong geopolitical relationship can be born out of a strong economic relationship, which often begins with trade.”

“Beyond Iraq, I am also profoundly worried about the continuing meltdown of Syria, which is a geopolitical Chernobyl. Until it is capped, it is going to continue to spew radioactive instability and extremist ideology over the entire region.”

“The policy of letting things alone, in the practical sense that the Government should never interfere with business or go into the business itself, is called Laisser-faire by economists and politicians. It has broken down so completely in practice that it is now discredited, but it was all the fashion in politics a hundred years ago, and is still influentially advocated by men of business and their backers who naturally would like to be allowed to make money as they please without regard to the interest of the public.”

“I’ve never needed a lobbyist personally to put my case. I’d rather put my case myself. But I don’t understand how other people look at things. A lot of people in business haven’t been involved in politics. They are frightened of ministers and the whole procedure. It’s not something to be frightened of. It’s something to go in and realize that people who go into politics, regardless of being Labor, Liberal, or Nationals, primarily go in to serve the community.”

“If China’s expansion into Africa and Russia’s into Latin America and the former Soviet Union are any indications, Silicon Valley’s ability to expand globally will be severely limited, if only because Beijing and Moscow have no qualms about blending politics and business.”

“Politics is another arena where, as far as I can tell, demonstrating any interest in logical analysis is regarded as a serious failing, like having poor personal hygiene. It leads to people being shunned and asked to leave the room so that the proper business of politics, such as name-calling and petty bickering, can proceed in the traditional lively and uninterrupted manner.”

“Politics, life, and business are not spectator sports. You have to get involved to get ahead. Most importantly, when you reach that level of success, keep the door open and the ladder down for others to follow.”

Read: How To Manage Geopolitical Risks For Your Business Safety?

The InCAP Desk - March 2, 2022 0
The threat of a war between Russia and Ukraine is already impacting global markets. For example, the Russian stock market has dropped by 14%...
Go to mobile version