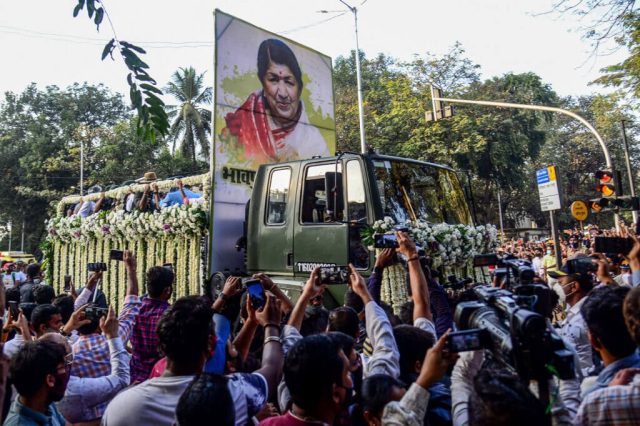 Lata Mangeshkar, one of India’s most well-known cultural icons and a vocalist who defined music for generations of Indians, died on 6 February 2022 and was honored with a state funeral attended by politicians and celebrities. “The Nightingale” Lata Mangeshkar received a state funeral.

Mangeshkar, 92, established her fame in Bollywood, and her voice has rung out on television sets, crackly airways, and movie theaters throughout most of India’s three-quarter-century independence, giving her the moniker “The Nightingale”.

“I am anguished beyond words,” Prime Minister Narendra Modi wrote on Twitter. “She leaves a void in our nation that cannot be filled.”

Modi joined mourners at a crowded open-air state burial late on the day, after her coffin was transported through the streets of Mumbai on a truck decked with flowers covered in the Indian flag.

Despite police building barricades and preventing public admission, thousands of people gathered around Shivaji Park, where she was cremated, climbing walls and trees to catch a sight of the proceedings and pay their condolences in any way they could.

Despite police building barricades and preventing public admission, thousands of people gathered around Shivaji Park, where she was cremated, climbing walls and trees to catch a sight of the proceedings and pay their condolences in any way they could. According to the Home Ministry, the government will observe state mourning with the flag flying half-mast until February 7 2022.

However, Mangeshkar died of “multi-organ failure after more than 28 days of hospitalization following COVID-19,” according to Pratit Samdani, who was treating her at Mumbai’s Breach Candy Hospital.

“The coming generations will remember her as a stalwart of Indian culture, whose melodious voice had an unparalleled ability to mesmerize people,” Modi wrote.

“The voice of a million centuries has left us,” actor Amitabh Bachchan said.

Maharashtra, Mangeshkar’s home state, declared a public holiday on February 7, 2022. India’s central bank rescheduled its monetary policy committee meeting to Feb. 8-10 due to the holiday. The policy decision is now expected on the following February 10.

West Bengal proclaimed a half-day holiday and encouraged the administration to play Mangeshkar’s songs for 15 days at key crossings around the state. As the first of three one-dayers versus the West Indies began, the Indian cricket team donned black armbands. Virat Kohli, the former Indian captain, said her music had impacted people worldwide. Sachin Tendulkar, another former captain, was among those who attended the burial.

True Lata Mangeshkar’s talents are like god-gifted. She began singing in her teens in pre-independence India, and during the course of her 73-year career, she sang over 15,000 songs in 36 languages. Her charming voice and vast range delighted music-obsessed Indians, who heard her perform everything from patriotic songs to love numbers in films and albums. Mangeshkar cut her teeth in the realm of Bollywood, where movies were impossible without at least six songs and where everything from romance to sadness was told through a ballad.

Also, Mangeshkar, a classically trained singer, adapted her voice to the demands of singing for Bollywood films, even voicing songs for an actress in her 20s while she was in her 60s. During the conflicts with China and Pakistan, her songs inspired millions of Indians to thank the armed services. Her songs are used at temples, shrines, and schools as prayers.

“My voice is a gift from God,” she once told an interviewer. “I learned to emote through my voice. When I sang a lullaby, I became a mother; when it was a romantic song, I was a lover.”

Cabaret numbers and songs with obscene or raunchy lyrics were the only tunes she refused to sing, claiming that they did not align with her principles. Nonetheless, Mangeshkar and her younger sister Asha Bhosle ruled the Hindi cinema business for about five decades, till the 2000s.

The InCAP - February 24, 2019 0
A boy was running in the country roads of Shorishapur - a remote village of Bajitpur. Could people even imagine that one day this...