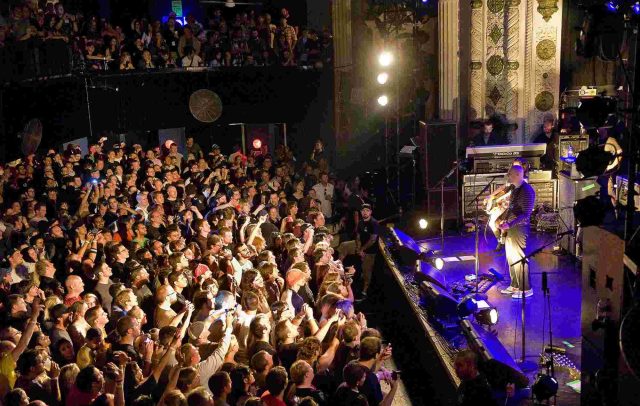 A local landmark is located at The North Park Theatre in Buffalo, New York is Featuring a single screen, 600 seats, and ornate domed ceilings, it is an increasingly rare gem in a sea of multiplex cinemas.
Ray Barker, the theater’s program director, said, “This is the kind of place you want to see a movie — you’re going to forget about the outside world and escape for a few hours.” He has been with North Park since the 1990s when he started as a concession worker.

Barker also said that the theater is waiting on a $200,000 grant it applied for under the Small Business Administration’s Shuttered Venue Operators Grant program. The park has reopened as pandemic restrictions lifted, but the aid is crucial to dig the landmark out of a mountain of debt accumulated over the last year.

The SBA’s SVOG program, a $16 billion fund, was created to help sustain the industry until in-person entertainment can resume. Music clubs, theaters, promoters, and more can access grants of as much as $10 million based on the gross revenue from 2019 as part of the program, which was included in the second Covid relief package signed into law in December.

After the initial launch of the SVOG, the SBA has reported 1,445 grants had been awarded for a total of $833.4 million. The agency said in the weekly report that 7,118 applications remain in the submitted phase, and 5,853 are in review. The combined requests represent $11.6 billion in grants.

Dave Bruno, the venue’s general manager, said he is eagerly waiting for the news about the status of a $2 million grant request.The music hall also has a rich history, starting in the early 1900s as a burlesque house, then a restaurant. It was reimagined as a concert hall in the 1970s. The aid will help them to pay off debts, bring back employees and prepare to reopen later this summer, Bruno said. Barked has stated that they could have been reopening sooner if we had the money and also asked for the request to employees to come back to work through the media.

What Did Elon Musk Urge?

The InCAP Desk - March 5, 2022 0
Elon Musk, the CEO of SpaceX, said on March 5, 2022, that some governments, but not Ukraine, have urged his company's Starlink satellite internet...