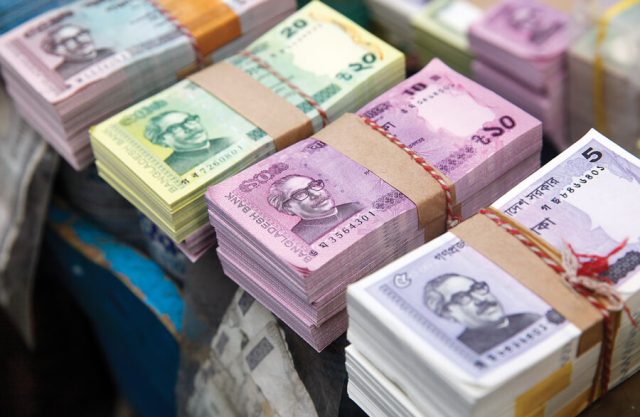 Money is a valuable asset. Without it, the essential activities of a country will become obsolete. The whole world will stop. Every country prints this money according to its own needs very systematically. But if you over-print it, it will bring more evil than good. In the same way, the institution responsible for making money cannot print extra money.

Who is responsible for making money?

A question may arise: Can Bangladesh Bank make more money anytime they want? Of course not! Because the central bank of a country prints money based on the economic condition of that country. These include the total wealth of the country, the total demand, the total income of the people. The matter becomes very easy to see with the help of an example.

Suppose the total wealth is ten loaves, and that country prints 1,000 Tk a year. Leaving all other conditions unchanged, if the price of each loaf is 100 Tk (1000 ÷ 10 = 100), then the economic situation of that country, i.e., the total wealth and the total money, will be equal. But the government printed 2,000 Tk the following year. So the real wealth is only ten loaves of bread. So what will happen in this situation? Then the price of those ten loaves of bread will increase from 100 Tk to 200 Tk (2000 ÷ 10 = 200), which means the product’s price has doubled.

Readers, in this situation, you must not have any difficulty understanding the people of that country in case of an increase in the price of goods. We are aware that when the prices of essential commodities go up in our country, we have to suffer. So printing money so unintentionally will ruin the economic balance of that country. This rise in commodity prices is called inflation.

Inflation refers to an economic situation when the price of a commodity rises sharply, and the value or purchasing power of money decreases. Inflation creates a crisis in which the country’s people cannot buy the goods they need even if they have cash because the value of the goods is more than the money in hand.

The money made by the country’s central bank will be returned to the people by the hand to have enough money in their hands. As a result of this money entering the mainstream economy, it will harm the country’s economy. But whether this money exists or not. Because already in the country’s market, inflation will happen. As a result, this extra money will not be of any use.

However, the economic development of a country is slow. As a result, the production of various commodities in the country continues to increase. The production also increases manifold due to the use of new technology. As a result, there are new employment opportunities in the country. Therefore, the scope of the labor market continues to grow. In that case, the income of the people of that country also gradually increases. As a result, the country’s GDP means gross domestic product. And the central bank prints 2-3 percent of this GDP. However, in developing countries, this rate is a little higher.

Although inflation may seem like an economic enemy of a country, it is not so bad in reality. Because if there is no inflation, the country’s overall development will not happen. Inflation will only increase the commodity price in the country, which will further increase the tendency to produce that commodity. New entrepreneurs will be created. This will make the development of the country possible. Therefore, mild inflation is favorable for the country’s economy.

What is the relationship between money and GDP growth?

Commodity prices will likely fall if domestic production increases and other conditions remain unchanged because the total assets will be more than the full amount.

To exemplify more, since people will have much money in their hands, everyone will want to buy their favorite thing with it. Remember, the government gave you much money. Then with that money, you will buy a car. Many like you will buy that car. Since the car’s production is limited and, the company will not be able to produce it in a short time, they will increase the price of the car considering the additional demand.

In this way, the product’s price will increase in other cases as well. So extra money will not be of any use. Now you must understand why the government cannot make money and give it to the people if it wants to.

If more money is released in the market without producing more, then the price of goods will go up. Therefore, printing money arbitrarily will not contribute to the economy. This will only increase the flow of money into the country, which is extremely risky.

For example, the country’s government decided to print 100 crore rupees and distribute them to the country’s people so that their financial problems could be alleviated to some extent. But since everyone will get this money and there are producers and traders of different products among them, they will increase that product’s price. Because they know people have enough money now and can afford to buy more. As a result of the increase in the price of goods, the extra money will not be used. If earlier the cost of the commodity was 100 Tk and as a result of a price increase, it increased to Taka.

And if you think you will keep your money in the bank, you will have to face even more severe risks. Suppose today you deposit 10,000 Tk in the bank. But if there is inflation in the market, BDT 10,000 will not be the same as before. After one year with that money, you can no longer buy things. In other words, as the value of money decreases, the money kept in the bank will lose its weight. In this case, the bank’s depositors will also have to face losses. And this is why no one wants to deposit money in the bank. The country’s banking system will collapse.

Investors will also be at risk and face losses. This is because the money that investors will invest will depreciate due to inflation. As a result, they will fail to make unexpected profits. That is why no one will be interested in investing in a new way. The country’s investment sector will also collapse. As a result, new entrepreneurs will not be created in the country.

The government earns money through bonds. But because of the declining value of bonds, no one will invest in bonds anymore. So, in this case, the government will lose investment in bonds.

However, if the gross domestic product increases, then the central bank of that country can print money by reviewing that country’s economy so that the total production and the total cash flow remain the same. It requires a lot of research and time. In addition, the central bank issues new notes every year to re-issue old notes or damaged notes so that the flow of money in the market is correct. However, this can be done if the country has a monetary contraction.

Many countries are now leaning towards printing money to deal with the coronavirus. This is also going to happen in the case of Bangladesh. In this case, some economists point out the negative aspects of this issue, but some are accepting this issue. According to them, everyone is in a financial crisis, and their income is off. In this case, inflation will not increase.

But in the last few years, a new discussion in the economy has been going on very loudly, going beyond the notion that “printing more money will lead to inflation.” According to this theory, the government can print as much money as it needs, not just relying on taxpayers, bank loans, or bonds to finance its various projects.

This theory is known as Modern Monetary Theory (MMT). The issue of money laundering has become a hot topic in our country, as the Nobel laureate economist in 2019, Abhijit Banerjee, has suggested.

He opined that the governments of developing countries, such as ours, should provide money to low-income people or the working class to continue. It will also flow cash into the market, which was halted due to the Corona situation. He spoke in support of the US Alliance but said that maintaining some independence was not the answer.

The InCAP Desk - December 20, 2021 0
Former Governor of Bangladesh Bank, Dr. Atiur Rahman, has been awarded the Rabindra Award introduced by Bangla Academy. It was announced on December 19....