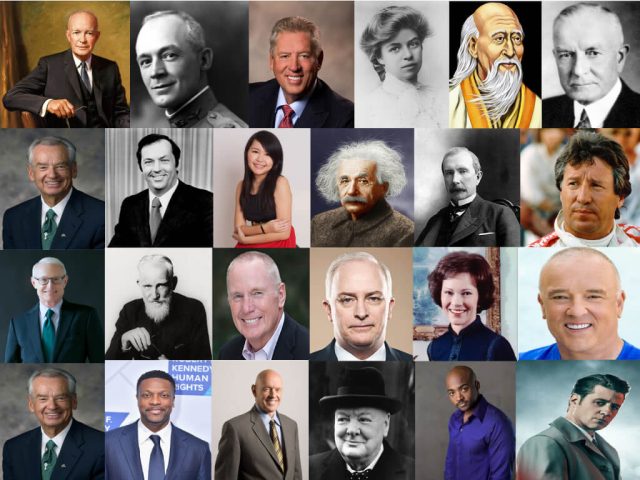 The essence of strategy is choosing what not to do. – Michael Porter

One of the tests of leadership is the ability to recognize a problem before it becomes an emergency. – Arnold Glasow

You don’t lead by hitting people over the head—that’s assault, not leadership. – Dwight Eisenhower

A man who wants to lead the orchestra must turn his back on the crowd. – Max Lucado

To lead people, walk behind them. – Lao Tzu

Innovation distinguishes between a leader and a follower. – Steve Jobs

Leadership is a choice you make, not a place you sit. – Robert F. Tucker

Management is efficiency in climbing the ladder of success; leadership determines whether the ladder is leaning against the right wall. – Stephen R. Covey

Success is walking from failure to failure with no loss of enthusiasm. – Winston Churchill

Ambition is the path to success. Persistence is the vehicle you arrive in. – Bill Bradley

Remember that failure is an event, not a person. – Zig Ziglar

If you want to increase your success rate, double your failure rate. – Thomas J. Watson

Victory is the child of preparation and determination. – Sean Hampton

I do not think that there is any other quality so essential to success of any kind as the quality of perseverance. It overcomes almost everything, even nature. – John D. Rockefeller

People do not lack strength, they lack will. – Victor Hugo

Desire is the key to motivation, but it’s the determination and commitment to an unrelenting pursuit of your goal — a commitment to excellence — that will enable you to attain the success you seek. – Mario Andretti

Willpower is the art of replacing one habit for another. – Michael Garofalo

We are a product of the choices we make, not the circumstances that we face. – Roger Crawford

The secret of happiness lies in taking a genuine interest in all the details of daily life, and in elevating them to art. – William Morris

A major part of successful living lies in the ability to put first things first. Indeed the reason most major goals are not achieved is that we spend our time doing second things first. – Robert J. McKain

On my own I will just create, and if it works, it works, and if it doesn’t, I’ll create something else. I don’t have any limitations on what I think I could do or be. – Oprah Winfrey

If you have an idea, you have to believe in yourself or no one else will. – Sarah Michelle Gellar

I had two options. One was to remain silent and never to speak and then to be killed by the terrorists. The second option was to speak up for my rights and then die. And I chose the second one. – Malala Yousafzai

What you do makes a difference, and you have to decide what kind of difference you want to make. – Jane Goodall

We do not need magic to change the world, we carry all the power we need inside ourselves already: we have the power to imagine better. – JK Rowling

If you just set out to be liked, you would be prepared to compromise on anything at any time, and you would achieve nothing. – Margaret Thatcher

The first step toward success is taken when you refuse to be a captive of the environment in which you first find yourself. – Mark Caine

Do not spoil what you have by desiring what you have not; remember that what you now have was once among the things you only hoped for. – Epicurus, Greek philosopher

If you are not willing to risk the usual, you will have to settle for the ordinary. – Jim Rohn

Lack of professionalism is enough to overthrow a promising entrepreneur from the business arena. – International Corporate Association of Professionals (InCAP)

The InCAP Desk - October 6, 2022 0
All happiness depends on a leisurely breakfast. - John Gunther To eat is a necessity, but to eat intelligently is an art. - François de la Rochefoucauld If...
Go to mobile version