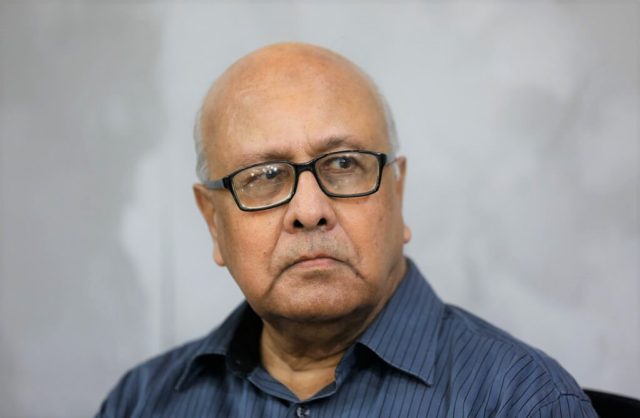 It is known that Bangladesh’s most significant achievement now is in the economy. In 50 years, the so-called ‘bottomless basket’ called Bangladesh has become a dazzling magic box. Gladly, aid-dependent Bangladesh has now become a trade-dependent country. However, the journey was not easy. Our brave entrepreneurs have taken a fancy path with high risks. Among others who were behind this success were economists and policymakers. Basically, these pioneers of economics, pathfinders, and dreamers have put Bangladesh in a position of dignity in the world for 50 years. In addition, we have introduced many masterminds who have developed the country’s economy. Among them, Khandeker Ibrahim Khaled is another prominent person.

He is not a classical economist in that sense. No new theory of economics came from his writings. He is not an entrepreneur either. No factory was built by him. He was one of the policymakers in his life. However, the government did not show the political commitment to implement his various proposals. He is a banker. He has worked in multiple banks all his life. And he used to write about numerous issues of economics. But his significant identity is that he could speak the truth with unparalleled courage.

In a real sense, he was the conscience of the country’s financial sector, the beacon of the financial industry. He has carefully practiced this identity till the last day of his life. He never stayed away from truthfulness in any problematic situation, nor did he avoid it by strategy. Khandaker Ibrahim Khaled has already taken his place in the economy as a banker and analyst. Khandaker Ibrahim Khaled is the portrait of an honest and brave man and truthful, which people will never forget. As he spoke, the general public knew the pros and cons of the country’s financial sector, and policymakers had the opportunity to correct it.

To know about Khandaker Ibrahim Khaled, he was born in 1941 in Gopalganj. He edited a book titled ‘Shekor Theke Lotapata: Satair-Gopinathpur-Gopalganj Khandakar Bongsho-Latika’ containing a description of the ancestors of the dynasty were for one and a half thousand years. The type of this book is rare.

Khandaker Ibrahim Khaled joined the banking profession in 1983 after obtaining a master’s degree in geography from Dhaka University and an MBA from IBA. He started his banking career by joining the then Habib Bank Limited as a probationary officer. He wrote in his memoirs, “In 1963, I joined the Habib Bank of Pakistan through a nationwide competitive examination. It was the largest bank in Pakistan regarding deposits, loans, and assets. The bank continued to innovate and offer new services. In 1985, they set up a mainframe IBM computer at the Motijheel office in Dhaka of Bangladesh and brought a wide range of activities under the computer. Drive-in branches were set up in various big cities in those branches; cash could be obtained only by sitting in a car, lowering the glass, and checking at a specially constructed counter. Even without computer networking, the checks of one branch of the 60 major branches across the country were cashed at another branch. Introduced internal traveler’s check, gift check. All this happened a long time ago in the sixties.

Mr. Khandaker Ibrahim Khaled further writes, “Today Habib Bank is the largest state-owned bank in Pakistan — in a different form and different character. Its predecessor, our Habib Bank, was privately owned. It was established in 1941 in Bombay, India. The owners were basic traders—a family of twenty-two families, businessmen of fourteen men. When state-owned banks are in turmoil in Pakistan, the group has lost business in Pakistan and has successfully set up its banks and financial institutions in various parts, including London. This perspective must be kept in mind. In Pakistan, bank ownership was family-based. Habib family owned Habib Bank. The directors of the board of directors were originally members of the Habib family. Some family members also joined the bank, but not with grace. They were highly educated — most of them were educated in Billet. The managers all did business — but no one was ever a defaulter. The Banking Companies Act also did not provide for the removal of defaulting directors. We used to call the people of the Habib family Shethji. Once a high ranking Shethji came to Dhaka from Karachi on occasion, he drove alone to the Sadarghat branch of the bank. It was a holiday. The doorman is sitting inside the room with a collapsible gate. Shethji went and asked the doorman to open the door. The doorman’s clear answer was, “The bank is closed.” Shethji, who introduced himself, said he had come to visit from the Karachi head office. The doorman replied, “I don’t recognize. I cannot open the door without the permission of the Bank manager. Go after the manager.” Inevitably Sethji returned and the next day announced a cash reward of five hundred rupees for the doorman along with a testimonial. I wanted to know the story of a recent bank owner of our country, what would he do? The director, without thinking, replied honestly, I can’t stand rudeness again.”

Khandaker Ibrahim Khaled officially ended his banking career in 2006. But until the last day, he was the most extensive observer of the country’s financial sector. He witnessed almost every event in the country’s banking history; he had to go through many adverse conditions, he was a victim of harassment during Ershad’s tenure. But he never hesitated to speak the truth.

In 1994, he was the MD of Krishi Bank. And Mostafa Aminur Rashid was the MD of Agrani Bank. One after another, allegations of irregularities in lending and embezzlement of loan money were coming in the name of Mostafa Aminur Rashid. Bangladesh Bank prepared a special inspection report but could not take any action due to political pressure; Instead of taking any punitive action, Agrani Bank decided to wait until the MD’s expected retirement. Several reports were published in the daily news about this. Finally, Mostafa Aminur Rashid retired, and Khandaker Ibrahim Khaled came to Agrani Bank from Krishi Bank. Then he took the helm of Agrani Bank with a firm hand. The previous MD almost took the bank to the brink of collapse, from where it brought the bank back to a good position.

After Agrani Bank, Khandaker Ibrahim Khaled became MD at Sonali Bank. At that time, Fazlur Rahman was a well-known defaulter businessman in Narayanganj. Just as he did not repay the loan from the bank, he also spent the money in his hands. He had special skills in doing work with the bribe. The list of people who have received his gift is quite long. Following the custom of joining Sonali Bank, Fazlur Rahman sent some gifts to Khandaker Ibrahim Khaled. He returned all the facilities by attaching a written rule on how much money an MD of the bank can take as a gift. And he left a copy of it in Fazlur Rahman’s loan file.

Moreover, Mr. Khandaker Ibrahim Khaled was appointed as the Deputy Governor of Bangladesh Bank in 1996. Lutfar Rahman Sarkar was the governor at that time. Mohammad Farasuddin joined as governor in 1996. Probably these two were the best pair of the central bank in Bangladesh. They prevented many irregularities in the banking sector. The then Finance Minister was the late Shah AMS Kibria. “The country’s banking sector is now under the control of the mafia,” he said at an event in front of the finance minister. But, no matter what, he was adamant in revealing the truth. He has been working independently with the support of the then finance minister.

In the nineties, the violence of the politically backed workers’ unions was intense in the banking sector. When the government formed a task force in 1996, Khandaker Ibrahim Khaled became its head. He submitted his final report on February 19, 1997. That report was also bold enough. There was a recommendation to ban trade unions in the banking sector. However, the then government did not implement the proposal due to political reasons.

After the Awami League government came to power in 2009, the second scandal over the stock market took place in 2010. At that time, the government had formed an investigation committee headed by Khandaker Ibrahim Khaled and submitted a detailed report within the stipulated time. He mentioned two very influential people close to the government in the information and asked them to be careful. After that, he got angry with the people involved in the scandal. Since the government took no action, many attempts were made to attack him personally and kill his character. But he was steadfast.

When Khandaker Ibrahim Khaled joined Pubali Bank in 2000, it was one of the weakest banks in the country. He was the MD of this bank for six years. Now that Pubali Bank is one of the best private sector banks in the country, its credit goes to Khandaker Ibrahim Khaled. From the day he joined this bank, he had placed a big picture of Bangabandhu in his room. Although the BNP government came in 2001, he did not remove that picture. The image was there until the last day. He was a devoted follower of Bangabandhu.

Yet over the past decade, he has been an outspoken critic of the banking sector’s chaos, lack of good governance, favoritism towards defaulters, and overall fragility. He repeatedly reminded that depositors and entrepreneurs mainly own 90 percent of a bank own the remaining 10 percent. So the bank will be running in the depositor’s interest, and it is the central bank’s responsibility to take care of it. He was highly critical of it, saying it was an extreme deviation, and gave constructive advice.

All in all, he had no hesitation in revealing the truth. Many did not want to speak out for fear of losing their freedom of expression, personal safety, or offending influential people. But he has never backed down from speaking the truth about the financial sector. Khandaker Ibrahim Khaled was a real media-friendly man. Unlike many others, he did not become known after his retirement. Even when he was in charge, he did not hide the information about the irregularities and corruption in the banking sector but considered it right to get publicity. He was vocal all his life about the violence of the debtors.

The headline of an analysis written by Khandaker Ibrahim Khaled on the front page of Prothom Alo on June 26 was, “Before there was mafia in the bank, now it has increased.” There he openly criticized several recent government decisions. A special report was published in Prothom Alo on June 9 about the enormous assets of Sikdar Group outside the country. Again, Khandaker Ibrahim Khaled spoke there.

The next day, the influential group protested, saying, “Ibrahim Khaled is a renowned country banker. Later, Ibrahim Khaled apologized to his uncle Sulaiman Khan Majlis for giving misleading information over the phone. ‘ He was the MD of a bank with whom I talked to him. And there is no question of apologizing. Every word of my statement is accurate. However, I am still adamant about that comment. I think the Sikder group wants to blackmail me.”

This courageous man used to go to the office of the Central Kachikanchar Mela in Segunbagicha daily. He was its director. He emphasized the importance of organizing children and adolescents to keep the country on the right path for future generations. Although he was frustrated with many issues of good governance, including the financial sector, he was optimistic about the country’s future.

Khondakar Ibrahim Khaled was the Managing Director of Bangladesh Krishi Bank from 1994 to 1995, Agrani Bank in 1996, and Sonali Bank in 1996. He was the Deputy Governor of Bangladesh Bank from 1996 to 2000. He was the Managing Director of Pubali Bank from 2000 to 2006. He later became the chairman of Krishi Bank. He died on February 24, 2021, after being infected with Covid-19. He will always be remembered among us.