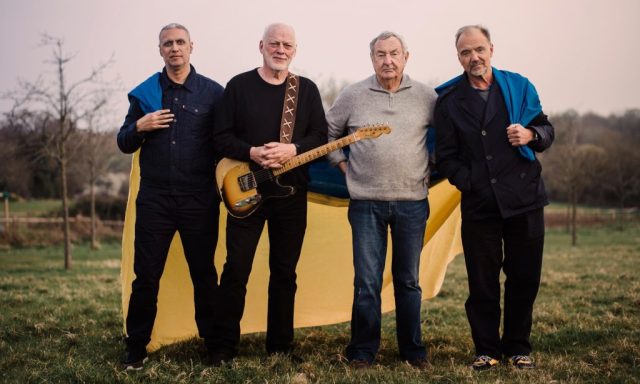 To help war-torn Ukrainians, Pink Floyd released their first new song, “Hey, Hey, Rise-Up!” after 30 years, on April 8, 2022. The band confirmed that the song will be used to collect money for humanitarian causes linked to the war. So, finally, Pink Floyd Released New Song After 30 Years to Support Ukraine.

In a viral video, Andriy Khlyvnyuk, singer of Ukraine’s best band, BoomBox, is seen singing in Kyiv’s Sofiyskaya Square. Mr. Khlyvnyukh canceled a world tour to return to Ukraine and assist in defending his homeland. David Gilmour, the band’s Guitarist, said, “It was a powerful moment that made me want to set it to music.”

The record company said he was able to speak with Khlyvnyuk from his hospital bed in Kyiv, where the singer was recovering after being hit by shrapnel in a mortar attack. “I played him a little bit of the song down the phone line, and he gave me his blessing. We both hope to do something together in person in the future,” Mr. Gilmour said.

The image accompanying the song is of sunflowers and was inspired by a viral video showing a Ukrainian woman insulting two armed Russian soldiers. In it, she tells the soldiers: “Take these seeds and put them in your pockets. That way, sunflowers will grow when you all rest here.”

Elon Musk Announced to Cut 10% of The Workers

The InCAP Desk - June 5, 2022 0
The drama of buying and not buying Twitter went on for some time; this time, Elon Musk, Chief Executive of Tesla, the world's richest...