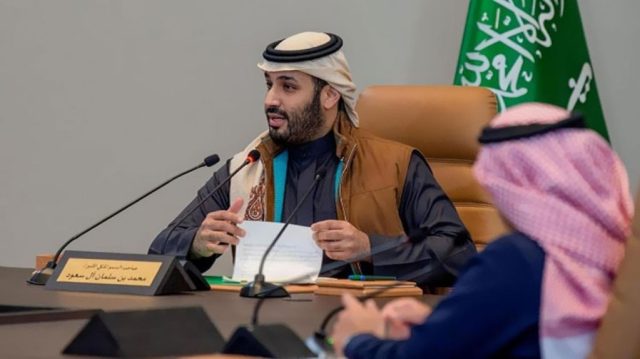 Saudi Arabia is moving closer to changing its national anthem and green flag, which has a sword engraved with Islam’s creed as the faith’s birthplace. So, Saudi To Change National Flag And Anthem.

According to state-run media, the kingdom’s unelected consultative Shura Council voted to support revisions on late January 31. It comes as Saudi Arabia’s youthful crown prince highlights its identity and pride. While the council’s judgments do not affect existing laws or structures, the vote is crucial since the monarch nominates its members, and their decisions frequently follow the king’s lead.

Other state-affiliated media states that the reforms support changing the system that governs the flag, motto, and national anthem, but not its substance. The council has not provided any more information. The local media reports, the proposed reforms aim to more clearly identify the proper uses of the state symbol, promote awareness about the flag and anthem’s value, and preserve the flag from infringement or neglect.

On January 31, Saudi authorities detained four Bangladeshi men for allegedly trashing the Saudi flag, which is Islamic. According to the Saudi Press Agency, only a draft revision to a nearly 50-year-old royal edict controlling the flag was approved by the Shura Council. Saad al-Otaibi, a council member, presented the modification, which was considered by a subcommittee before being debated by the full council.

The suggestion comes as the country, which was long ultra-conservative, undergoes fast reforms. Crown Prince Mohammed bin Salman has been working to reinvent Saudi identity, replacing pan-Islamism with a national-cultural identity that is not simply determined by religion, with the support of his elderly father, King Salman.

One recent example is a royal proclamation designating February 22 as Saudi Arabia’s Founding Day. The national holiday commemorates Imam Muhammad bin Saud’s attempt in the 18th century to build the first Saudi state before the Ottomans defeated it. Also, this week, the Saudi government ordered that “Arabic coffee” be renamed “Saudi coffee” in a new effort to promote awareness of a “cultural aspect that represents the Saudi identity” and its traditions, according to state media.

Since 1973, the green Saudi flag has contained a white Arabic calligraphy Islamic confession of faith that reads, “There is no deity but Allah; Muhammad is Allah’s Messenger.” A sword is hidden behind those words. In Mecca, the birthplace of Islam, where the Prophet Muhammad was born and received the first commands of the Quran, the monarchy welcomes Muslim visitors from all over the globe.

In the absence of a free press, state-controlled media channels offered further details on the Shura Council‘s proposal for flag and anthem rules, which would be presented to King Salman for approval. According to organizations such as Reporters Without Borders, no local independent media exists in Saudi Arabia, and persecution has increased under the crown prince.

The daily Asharq Al-Awsat and Sabq news site reported the idea came about due to the rapid changes the kingdom has undergone in recent years. Those include changes to existing legislation to support the goals and initiatives of Vision 2030 — the crown prince’s ambitious national project to overhaul the Saudi economy and make it more resilient in the face of fluctuating oil prices and sustainable energy.

The InCAP Desk - May 23, 2022 0
Austrian President Alexander Van der Bellen, a 78-year-old former Green Party leader, has indicated that he will run for re-election to a second six-year...
Go to mobile version