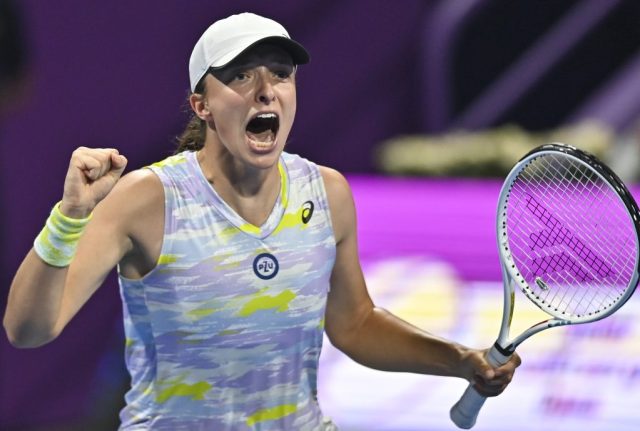 Iga Swiatek of Poland became the new world number one in women’s tennis on March 25, 2022, defeating Viktorija Golubic of Switzerland 6-2, 6-0 at the WTA Miami Open. Ms. Swiatek will replace Ashleigh Barty, the three-time Grand Slam winner from Australia, who announced her retirement earlier this week. The article is about Iga Swiatek Becomes New WTA World No.1.

“Pretty surreal,” Swiatek said. “On one hand, these are the most special moments that you’re going to remember for the rest of your life, but on the other hand, that match was just another match.”

The 20-year-old Warsaw-born star needed to win her second-round match at the South Florida hardcourt event to ensure that she would replace Barty in the following rankings next month. Tournament director James Blake and former WTA number one Lindsay Davenport celebrated and praised Swiatek in an on-court ceremony following the victory.

Swiatek said, “I never really imagined that moment because, truth to be told, I was working day-by-day and playing tennis well, but I never had a strong belief that it could happen. So it’s even more surreal for me.”

She didn’t feel betrayed by its manner, which had arrived unexpectedly following Barty’s stunning departure. She added, “I loved every moment of it. It doesn’t matter to me if there were fireworks. The crowd was supportive. They were excited. I’m just soaking everything in because I didn’t have any expectations.”

Swiatek earned Poland’s first Grand Slam singles victory at the 2020 French Open. Swiatek has had a fantastic start to the season, winning WTA titles in Doha and Indian Wells, and is now on a 12-match winning run, which is a career-high. She’s also the first player to win five or more titles before turning 21 since Caroline Wozniacki of Denmark in 2009.

If Swiatek had lost, Paula Badosa might have taken over as number one, but the Spaniard would have been required to win the Miami Open. Swiatek is the 28th woman to reach the WTA summit and the youngest since Caroline Wozniacki in 2010, but she doesn’t anticipate anything to change for her due to her ascent.

“I think it’s going to be a little bit different. Maybe the hype will be a little bit bigger, but I’m ready for it. And honestly, it’s part of the job,” Swiatek said. “From my perspective, I don’t think anything will change. Maybe I’ve got to watch if I’m wearing clean clothes and representing tennis well. So I’m going to be careful with that. But honestly, I’m the same person.”

The InCAP Desk - May 14, 2022 0
Toyota is suspending 14 production lines at eight factories in Japan. The prolonged COVID-19 lockdown in Shanghai, China, has made it difficult for the...
Go to mobile version