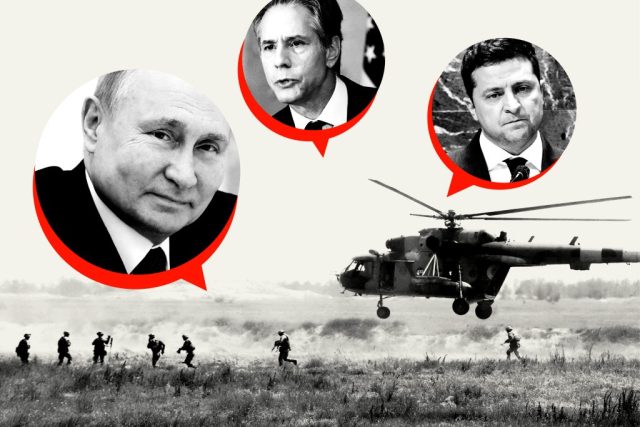 Russian President Vladimir Putin recognized two separatist regions of eastern Ukraine as independent, after years of backing rebels there, and directed troops to the area for on February 21 peacekeeping operations. So situation is the increasingly complicated Russia-Ukraine crisis.

At Ukraine’s border, Russia has amassed tens of thousands of troops, an act of aggression that might escalate into Europe’s deadliest military conflict in decades. Moreover, the Kremlin appears to be preparing for war by transporting military equipment, medical units, and even blood to the front lines. Russia has stockpiled 150,000 troops near Ukraine, according to President Joe Biden. In this context, diplomatic negotiations between Russia and the US and its allies have failed to produce any results.

On February 15, Russia announced plans to “partially withdraw soldiers,” possibly indicating that Russian President Vladimir Putin is eager to deescalate the situation. However, the situation has not improved in the following days. Since then, the US has claimed that Putin has increased his force numbers, and US President Joe Biden told reporters on Friday that he is “convinced” that Russia will invade Ukraine in the coming days or weeks. “We fear they will target Kyiv, the capital of Ukraine,” Biden stated.

And the underlying concerns that have led to this impasse remain unaddressed. The war is about Ukraine’s future. However, Ukraine provides a broader platform for Russia to restore its influence in Europe and the rest of the world, for Putin to cement his legacy. For Putin, these are not insignificant goals, and he may decide that the only way to achieve them is to launch another incursion into Ukraine — an act that, at its most heinous, could result in tens of thousands of civilian deaths, a European refugee crisis, and a response from Western allies that includes harsh economic sanctions.

The United States and Russia have set clear red lines to clarify the situation. Russia presented the US with a list of requests, some of which the US and its allies in the North Atlantic Treaty Organization considered non-starters (NATO). Putin requested that NATO halt its eastward expansion and refuse Ukraine membership, as well as a reduction in troop deployment in countries that joined after 1997, effectively turning back the clock on Europe’s security and geopolitical alignment by decades.

At the end of the Cold War, some leading American foreign policy intellectuals contended that NATO should never have pushed so close to Russia’s borders in the first place. NATO’s open-door policy, on the other hand, states that they can choose their security partnerships. Accepting Putin’s demands would give the Kremlin veto power over NATO decision-making and, by extension, the continent’s security.

Now the entire world is watching to see what Putin will do next. It isn’t a foregone certainty that an invasion will occur. Even while it warns of a “military-technical response” to stalled discussions, Moscow continues to deny any preparations to invade. However, if war breaks out, it might be terrible for Ukraine, with unforeseeable consequences for the rest of Europe and the West.

Why is Russia Threatening Ukraine Now?

The current situation between Russia and Ukraine continues the one that began in 2014. However, recent political events in Ukraine, the United States, Europe, and Russia assist in explaining why Putin may believe now is the right time to act.

One of these developments is the election of Ukrainian President Volodymyr Zelensky, a comedian who portrayed a president on TV and subsequently became the president. Apart from the numerous things you might remember Zelensky for, he promised during his campaign to “reboot” peace talks in eastern Ukraine, including dealing directly with Putin to resolve the crisis.

Russia, too, was probably hoping to gain something from this: Zelensky, a political neophyte, was seen as someone who may be more receptive to Russia’s point of view.

According to one, Russia wants Zelensky to implement the Minsk agreements from 2014 and 2015, which would bring pro-Russian regions back into Ukraine and serve as a “Trojan horse” for Moscow to exercise power and control expert. No Ukrainian president could accept those demands, therefore under persistent Russian pressure; Zelensky has turned to the West for assistance, openly expressing his desire to join NATO.

Ukraine’s public opinion has been pushed to favor membership in Western organizations such as the EU and NATO. However, this may have left Russia feeling like it’s used up all of its political and diplomatic options to reintegrate Ukraine. “Moscow’s security elites believe they must act now because, if they do not, military cooperation between NATO and Ukraine will intensify and grow more sophisticated,” said Sarah Pagung of the German Council on Foreign Relations. In 2021, Putin again put the West to the test by amassing armies and equipment along the Ukrainian border.

According to experts, Putin’s attitude toward the United States has also evolved. Putin sees the US’s political upheaval and the chaotic Afghanistan pullout (both of which Moscow is well aware of) as indicators of weakness.

Putin may also see a split in the West over the United States’ position in the world. Biden is still working to mend the transatlantic relationship following the discord erupted during Trump’s presidency. Some of Biden’s diplomatic gaffes have enraged European allies, like those above clumsy Afghan departure and the nuclear submarine pact with the UK and Australia, taking France unaware guard.

Europe is not without its internal schisms. The EU and the United Kingdom are still struggling with the consequences of Brexit. The ongoing Covid-19 epidemic is causing widespread concern. After 16 years under Angela Merkel’s leadership, Germany now has a new chancellor, Olaf Scholz, and the new coalition government is still figuring out its foreign policy. Like other European countries, Germany imports Russian natural gas, which is currently driving up energy prices. France’s elections are in April, and President Emmanuel Macron is attempting to carve out a position in these talks.

These schisms, which Washington is working hard to prevent, could boost Putin. According to some experts, Putin faces his domestic difficulties, including the coronavirus and a stumbling economy, and he may believe that a foreign adventure will bolster his domestic standing, as it did in 2014.

Ukraine has derailed the Biden administration’s great objectives – China, climate change, and the pandemic — and has risen to the top of the US’s priority list, at least for the time being.

“One thing we’ve seen in common across the Obama and Biden administrations is that they don’t perceive Russia as a geopolitical event-shaper, but we witness Russia affecting geopolitical events again and again,” said Rachel Rizzo, an Atlantic Council Europe Center researcher.

The US has sent 3,000 troops to Europe as a show of support for NATO, and another 3,000 are expected to be sent to Poland, while the Biden administration has stated that US forces will not fight in Ukraine if a war breaks out.

The United States, along with other allies like the United Kingdom, has issued a warning to Ukraine nationals to leave as soon as possible. The US embassy in Kyiv was closed this week, and functions were temporarily moved to western Ukraine.

In collaboration with its European allies, the Biden administration is working on a bold plan to punish Russia if it invades again. The so-called nuclear options, such as an oil and gas embargo or cutting Russia off from SWIFT, the electronic messaging service that enables global banking transactions, are implausible, owing to the potential economic consequences. Russia is not an Iran or a North Korea; it has a large economy with extensive trade, particularly in raw commodities, gas, and oil.

“Sanctions that are harmful to your target are equally harmful to the sender.” “Ultimately, it comes down to the price that the citizens of the United States and Europe are willing to pay,” said Richard Connolly, a political economy lecturer at the University of Birmingham’s Centre for Russian and East European Studies.

The Biden administration’s most severe measures being considered are financial restrictions against Russia’s largest banks — a step that the Obama administration did not take in 2014 — and an export ban on advanced technologies.

Putin must decide for himself what he desires. Olga Lautman, the senior fellow at the Center for European Policy Analysis, said, “He has two possibilities.” “Never mind, just kidding,” one option is, “which will reveal his vulnerability and indicate that he was intimidated by the United States and Europe standing together — and that will create a weakness for him at home and with countries he’s attempting to influence.”

“Or he goes all-in on an attack,” she explained. “At this moment, we have no idea where it’s heading, but the outlook is bleak.”

This is the position Putin has positioned himself in, making a retreat from Russia seem improbable. That isn’t to say it won’t happen, and it doesn’t rule out the prospect of a diplomatic settlement that allows Putin to declare victory without the West meeting all of his demands. It also doesn’t rule out the option that Russia and the United States may remain locked in a standoff for months, with Ukraine trapped in the middle and under Russian threat. But it also indicates that conflict is still a possibility. That is, however, everyday life in Ukraine.

“For many Ukrainians, we’re accustomed to war,” said Oleksiy Sorokin,the political editor, and chief operating officer of the English-language Kyiv Independent publication. “Having Russia on our tail,” he added, “having this constant threat of Russia going further — I think many Ukrainians are used to it.”