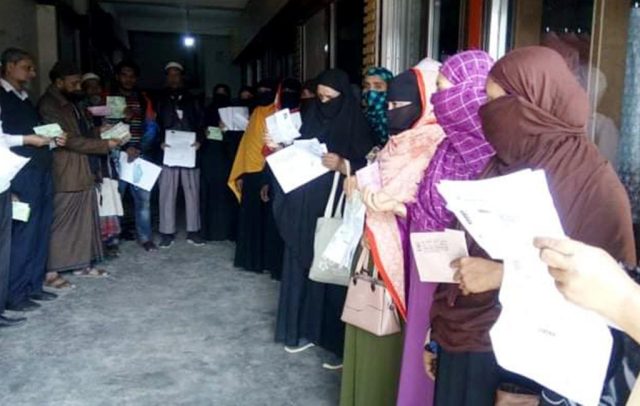 Shah Sultan Multipurpose Co-operative Society Limited has snatched Tk 200 crore from customers from four Upazilas of Narsingdi and fled. The company has collected deposits from thousands of customers by showing the temptation of profit through various projects as per Islamic Sharia. The article contains Embezzling of Tk 200 cr By Showing Islamic Sharia-based Profit.

Sources said thousands of customers in four Upazilas of Narsingdi had been cheated after investing in the company registered with the Cooperatives Department. The district co-operative office said that necessary steps would be taken after investigating the customers’ complaints.

According to the victims, in 2010, Shah Sultan Multipurpose Co-operative Society Limited set up its head office on the 2nd floor of a market in Ghoradia area of ​​Chinishpur union in Narsingdi Sadar Upazila. Claiming to be approved and regulated by the Department of Cooperatives, the company is tempted to make lucrative profits through business ventures by Islamic Sharia. In this way, they started collecting deposits from the customers by continuing the campaign.

The company has been providing profit to the customers as per the terms and conditions. They started operating various business establishments at one stage, including Shah Sultan Textile Mill, Shah Sultan Properties, Market, and showing lucrative temptations. Due to this, the number of subscribers is gradually increasing.

In phases, the branch offices of Shah Sultan Multipurpose Co-operative Society Limited were also established in Palash, Shibpur, and Manohardi Upazilas of the district. The offices employ people educated in Islamic teachings and are known locally as “faithful.” They lure customers and collect crores of rupees in deposits.

Many people invest in Shah Sultan by taking money earned from emigration, money from land sales, and even money kept in other banks as they get business profit every month.

But the company seems to have suddenly lost in January this year by stealing crores of rupees across the district. This left thousands of customers destitute. Due to the cowardly situation, the people in charge of the association’s management have disappeared by pulling the notice announcing the temporary closure of the office.

At the same time, people working in the field as employees of this association cannot be found. As a result, several customers, including the deputy commissioner, have lodged a written complaint with the local co-operative department to get their money back.

Habibur Rahman, a college teacher in Shibpur Upazila, said, “the association has been doing well since its inception in 2010. The profits due to the customers were paid on time. They have invested in various businesses, including land. As far as I know, my relatives have taken about ten crore rupees from different customers of Shibpur Upazila.

Sushant Debnath, an expatriate customer, said, “I got a dividend for a few months after investing a considerable amount. But, now all the activities have been stopped, and the association’s employee has fled. With this, unrest is going on in my family.

A customer named Azizul Haque said, “I had deposited BDT 6 lakh in my name and another 2 lakh Tk in the name of my wife and child.” At present, the people of the association are missing; their mobile numbers are also blocked. We estimate that they have taken 200 crore BDT from the district. Many customers, including me, have lodged separate complaints with the Deputy Commissioner, Cooperative Department, and Police Station.”

Narsingdi District Cooperative Officer, Salman Iqbal, said that these associations could not do significant transactions according to the rules. During the regular audit, no such irregularities or allegations were found against the association’s authorities. However, now there are allegations that they have stopped their activities. Therefore, necessary action will be taken after investigating the complaints of the members or customers of our association in different Upazila offices. If the allegation is proved, the registration of the association will be canceled, and steps will be taken to distribute the assets of the association among the members by liquidating them.

Wayfarer, Descend On The Way