Home Editorial Life of Fisheries in Sri Lanka Amid Crisis 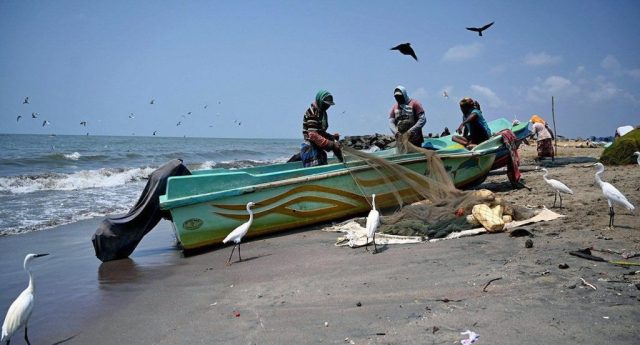 The sky and waters off the coast of Sri Lanka are clear blue, but a deteriorating economic crisis has kept fishers stuck at Negombo port, out of gas and unable to bring in the day’s catch. The neighboring waters are teeming with fist-sized prawns and mackerel, common ingredients in the island nation’s traditional seafood curries. The editorial portrays Life of Fisheries in Sri Lanka Amid Crisis.

However, the crisis has left coastal villages without enough gasoline to send their ships out to sea, and the consequences are being felt across the country. “On good days, if we queue up before five a.m., we’ll get fuel by three p.m. But, even that is not an option for some because the kerosene is gone by the time they reach the end of the line,” said Arulanandan, a long-time member of Negombo’s close-knit fishing community.

Idle crew members sun themselves on deck or rest against the rails of trawlers drifting in the sea around the local estuary, chewing on cigarettes while they wait for news of a new diesel supply. Their ships are equipped to travel deep into international waters for weeks at a time, but they have been unable to do so due to shortages.

Other fishermen labor closer to the shore on smaller kerosene-powered motor boats like Arulanandan’s, although locals estimate that three out of four of these boats remain idle on any given day. If a crew specializing in catching bait runs out of fuel, other boats that are lucky enough to find kerosene are also obliged to stay on land. Arulanandan expressed his thoughts that his kid often asks him why they are suffering from hunger.

The country’s largest fish market—a lively open-air warehouse that generally serves as a nexus for wholesale customers from around the country—is an hour’s drive south, on the outskirts of the capital Colombo. The impact of Sri Lanka’s diminishing catch is palpable here, with significantly less seafood reaching stallholders and far fewer consumers passing through.

“The purchasers come from a long way away, and they haven’t shown up due to diesel and petrol shortages,” explains Mohammed Asneer, a teenage Shrimp Vendor. “Our revenues have decreased while our expenses have increased.”

Mr. Asneer becomes irritated as he laments his precarious situation and declares that he would take any opportunity to travel abroad. He told, “I don’t want to be in this nation anymore. We work in a fish market and can’t afford even a kilo of fish. So, what will the rest of us do?”

The government of Sri Lanka admits that the current economic crisis is the country’s worst since its 1948 independence from Britain. Inflation is out of control. For example, when diesel is available, the price has nearly doubled in months, while government records show that the average price of groceries increased by 25% in January.

“Everything is costly—very it’s tough for us to do business,” says K.W. Shiromi, owner of Mama’s Place seafood restaurant in Weligama, a picturesque southern coastal village.

A smattering of foreign tourists picks a fish from the roadside for Shiromi’s brother to scale and gut before sending it to the kitchen to be sautéed in chili and spices. As a few satisfied customers watch the waves roll in at their tables, Shiromi tells AFP that the rising cost of her catch has forced her to jack up prices. “If the government does something to make things better, everyone will be happy. Otherwise everyone in Sri Lanka will suffer,” she says.

The InCAP Desk - May 24, 2022 0
Tom Cruise received a surprise Palme d'Or at the premiere of Top Gun: Maverick, capping off a spectacular day at the Cannes Film Festival...
Go to mobile version