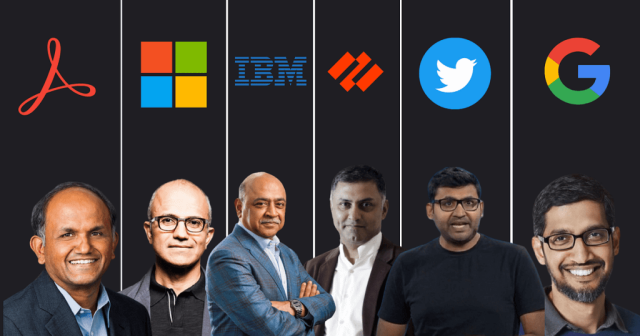 In November, co-founder Jack Dorsey was replaced by Twitter’s chief executive officer (CEO), Parag Agarwal. Satya Nadela, Ajaypal Singh Banga, Sundar Pichai, and other Indian CEOs were appointed earlier. After the 37-year-old Parag took over the post, the media asked why so many Indians in Silicon Valley, the birthplace of internet and technology business. A BBC report has tried to find that answer.

Indians are thrilled with Agarwal’s appointment as CEO of Silicon Valley, one of the most influential social media platforms in the Internet economy and high-tech commercial hub. There are reasons for this. Indians have been tweeting and retweeting congratulations to Parag. Mahindra Group businessman Anand Mahindra’s tweet is funny. He tweeted, “Is this the Indian CEO virus in Silicon Valley that has no vaccine?” Because the top executives of 16 companies like IBM, Adobe, Vimeo, including Satya Nadela of Microsoft, Sundar Pichai of Google, are all Indians.

According to the BBC, Indians make up only 1 percent of the American population. But in Silicon Valley, that number is again 6 percent. Out of these 6 percent, Indians again dominate the top positions of the big technology giants. But now the question is, how do Indians position themselves in the top US technology companies in the world?

R. Gopalakrishnan, former executive director of Tata Sons and co-author of The Made in India Manager, says the way Indians train or train their citizens for fighting spirit is unmatched by any other nation. Citing renowned Indian corporate strategist CK Prahlad, he said, “Birth certificates, death certificates, from infrastructural inadequacies to school admissions and employment, pave the way for many Indians to become ‘natural directors.’ Growing up through competition and chaos, Indians were made problem solvers. They prioritize professional life over personal life and adapt to the culture of extra work in the American office. These traits give Indians a place in the ranks of world leaders.

India has long given importance to IT education. He has also taken various steps for this. One of the initiatives is the Indian Institutes of Technology (IITs). Thousands of students are studying in different branches across the country at government expense. In the 1980s, IIT students began immigrating to the United States for better access. They are now setting new records of success in that US territory.

The CEO of Silicon Valley of Indian descent also represents the country’s 4 million minorities, who are also among the richest and most educated people in the United States. Out of these 4 million, about 1 million are scientists and engineers. This was made possible by changes in US immigration policy in the 1980s.

Ajit Kumar, chief information officer at HCL Technologies in India, said that as the number of Indians seeking a master’s degree in computer science and electronics increased in the 1980s, Americans were less inclined to pursue higher education in these two fields. At that time, Indians who got job opportunities in American companies have risen to higher positions today. That’s why a significant portion of IT professionals in the United States today are Indians.

All the CEOs, including Sundar Pichai, Satya Nadela, Parag Agarwal, who have risen to the top position, are following their path. However, some of the catalysts behind the rise of all are assumed to be almost the same—for example, more emphasis on science and mathematics since childhood. Most Indian parents urge their children to study these subjects. And students are taught that skills in these areas are the key to success in a career. After Parag Agarwal became the CEO of Twitter, his mother said, ‘Parag loved computers and cars since childhood, And numbers were his favorite subject.’

India, a country of 1.3 billion people, has fierce competition in education. Only a small number of students get admission to IITs. More than 22 lakh students have taken part in the admission test against 17,000 seats in IITs this year.

For example, Parag Agarwal was one of the best students in his home state of Maharashtra. He passed the IIT exam and set a goal to build a career in this field. However, one of his school classmates said that even among the best students, the talent of pollen stood out.

In a 2016 interview with American journalist Stephen Dabner, Satya Nadela spoke about her school. The school is one of the best schools in India. It is a public school in Hyderabad, Andhra Pradesh. The school at Begumpet in Hyderabad has created executives of many reputed organizations globally. For example, Microsoft chief executive officer (CEO) Satya Nadela, Adobe CEO Shantanu Narayan, and MasterCard executive chairman Ajaypal Singh Banga (who was CEO until last year) have attended the school.

According to CNBC, in an interview with Dabner, Nadela wanted to know the school’s contribution in her native India and Hyderabad. The chief executive of Microsoft said, “I believe that I have benefited from the specific structure of the education system in that country.”

Education is not limited to the classroom

Acknowledging the contribution of Hyderabad Public Schools (HPS) in her life, Nadela said, “One of the best aspects of the school is that students get the opportunity to engage in various activities outside the classroom according to their interests.” “Shantanu was controversial, I was a cricketer, and we all learned a lot there,” he said.

Selection of the best talents

According to a Hong Kong-based South China Morning Post report, well-known companies recruit staff to 23 IIT campuses across India each year in search of the best talent. This year, many graduates have got jobs in local institutions in India. Some of them are offered a salary of several lakh rupees a year at the beginning of their employment.

IIT colleges are also a source of talent for multinational companies in the United States. Silicon Valley technology companies offer jobs to the best students in India with attractive salaries and other benefits.

Ajay Lavakare, a former IIT student who immigrated to Silicon Valley in the 1980s, told the South China Morning Post, “Our IT college system emphasizes mathematical analysis and engineering skills. There is also an attempt to ensure universal standards in other matters. That is why Indians have increased confidence in the management of Fortune-500 or the top 500 companies registered in the US capital market. He said that one of the aspects of growing up in India is that they have acquired the quality of keeping pace with the uncertain environment from the time of education. At this time, they learn how to achieve big goals by using limited resources.

Lavakare highlighted the quality of adapting to adversity. According to the Government of India, about 20 percent of the population is poor. There are power and water supply crises in many areas. Indians have learned to cope with these obstacles. They value innovative endeavors to meet the lack of resources and facilities in this environment. Indians call this a creative attempt to meet daily needs using limited resources ‘jogar’. It is now part of their identity.

Business experts praised ‘Jogar.’ There is a book called ‘Jogar Innovation.’ The book’s authors are Navi Raju, Joydeep Prabhu, and Simon Ahuja. In the book, they write, the virtue of working with limited resources teaches Indian businesses to survive in the global reality of complex and limited resources. Because of these same qualities, they also acquire the ability to develop.

In an article published in Stanford Social Review Magazine five years ago, academic Jamal Bokairi emphasized the importance of incorporating jogar into socially innovative leadership. “Modern companies around the world now need a new generation and a new generation of chief executives,” he said. The reason is that those who are like that can adapt themselves to the surrounding environment and lead the movement and business.

Agreeing with Jamal Bokairi, Lavakare said that there was no one to advise him when he started his career in Silicon Valley three decades ago. There was no network of familiar people. At that time, he was inspired by other successful Indians like Binod Khosla, co-founder of Sun Microsystems, and Sabir Bhatia, founder of Hotmail. Indeed, it’s time for India.

The InCAP Desk - May 26, 2022 0
On June 25, 2022, Prime Minister Sheikh Hasina will open the long-awaited Padma Multipurpose Bridge to traffic. Obaidul Quader, the Minister of Road Transport...
Go to mobile version