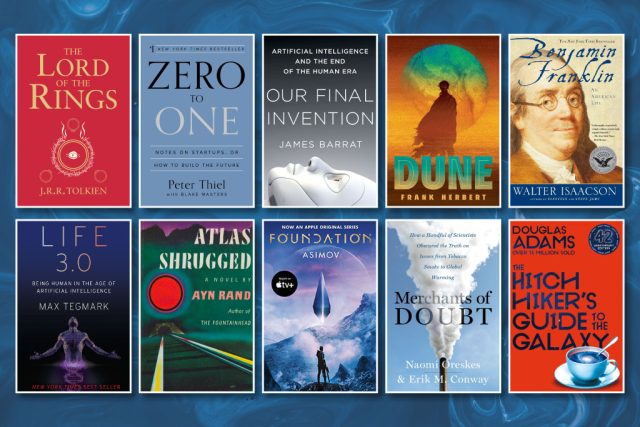 The Lord of the Rings by J. R. R. Tolkien

The title directs to the story’s main antagonist, the Dark Lord Sauron, who made the One Ring to lead the other Rings of Power given to Men, Dwarves, and Elves in his campaign to establish all of Middle-earth in an earlier age. From homely beginnings in the Shire, a hobbit land reminiscent of the English countryside, the novel ranges across Middle-earth by following the quest to eradicate the One Ring mainly via the eyes of the hobbits Frodo, Sam, Merry, and Pippin.

The Hitchhiker’s Guide to the Galaxy by Douglas Adams

The book is a comedy science fiction franchise. The text refers to the misadventures of the final surviving person, Arthur Dent, following the demolition of the Earth by a Vogon constructor fleet to create a way for a hyperspace bypass. Following his saving, Dent discovers the galaxy with Prefect and encounters Trillian, another human who had been taken from Earth before its destruction by the two-headed President of the Galaxy Zaphod Beeblebrox and the melancholy Marvin, the Paranoid Android.

It is a non-fiction book composed by American historian and journalist Walter Isaacson. It was published in 2003 by Simon & Schuster; the biographical work details the life and times of prominent U.S. statesman Benjamin Franklin. The book has received praise from multiple publications, including Foreign Affairs and The Guardian.

Our Final Invention by James Barrat

Merchants of Doubt by Erik M. Conway and Naomi Oreskes

It represents parallels between the global warming controversy and earlier controversies over tobacco smoking, acid rain, DDT, and the hole in the ozone layer. Oreskes and Conway pen that in each case keeping the discussion alive by spreading doubt and confusion after a scientific consensus had been reached was the basic strategy of those malicious actions. In particular, they discover that Fred Seitz, Fred Singer, and a few other contrarian scientists joined forces with conservative think tanks and private corporations to challenge the scientific consensus on many contemporary issues.

This science fiction book series was first published as a series of short stories in 1942–50, and subsequently in three collections in 1951–53; for thirty years, the series was a trilogy: Foundation; Foundation and Empire; and Second Foundation. The premise of the stories is that, in the waning days of a future Galactic Empire, the mathematician Hari Seldon spends his life improving a theory of psychohistory, a new and effective mathematical sociology. Using statistical laws of mass action can expect the future of large populations. Seldon foresees the imminent fall of the Empire, which encompasses the entire Milky Way, and a Dark Age lasting 30,000 years before a second empire arises.

It discusses Artificial Intelligence and its impact on the future of life on Earth and beyond. The book has various societal implications that can be done to highlight the chances of a positive outcome, and potential futures for humanity, technology, and combinations thereof. It focuses on emerging technology such as artificial general intelligence that may someday, in addition to learning, be able to redesign its own hardware and internal structure. The first chapter of the book looks at the origin of intelligence billions of years ago and goes on to project the future development of intelligence.

Zero to One by Blake Masters and Peter Thiel

Iterating on existing products takes the world from 1 to N. Zero to One is about how to establish companies that create NEW things. Peter Thiel calls on entrepreneurs to make valuable businesses around such opportunities to build a better future for everyone. This book is for entrepreneurs, founders, or investors that want to build or invest in valuable businesses. While much of the pieces of advice is geared towards innovative startups, many of the insights apply to any businesses that want to carve out a profitable niche. Indeed, it’s an inspirational read for those who are interested in business strategy.

Atlas Shrugged is a 1957 novel with elements of science fiction, mystery, and romance, and it contains Rand’s most extensive statement of Objectivism in any of her works of fiction. She described the theme of Atlas Shrugged as the role of man’s mind in existence. The book explores many philosophical themes from which Rand would subsequently develop Objectivism, including reason, property rights, individualism, and capitalism, and depicts what Rand saw as the failures of governmental coercion. It represents the dystopian United States, where private businesses suffer under increasingly burdensome laws and regulations.

Dune is a 1965 epic science fiction, originally published as two separate serials in Analog magazine. It tied with Roger Zelazny’s This Immortal for the Hugo Award in 1966 and won the inaugural Nebula Award for Best Novel. Dune is fixed in the distant future amidst a feudal interstellar society in which several noble houses control planetary fiefs. It depicts the story of young Paul Atreides, whose family accepts the stewardship of the planet Arrakis. While the planet is a barren and sparsely populated desert wasteland, it is the only source of melange, or “spice”, a drug that extends life and enhances mental abilities. Melange is also essential for space navigation, which requires multidimensional awareness and foresight only the drug provides.

The InCAP Desk - March 3, 2022 0
Reading is beneficial to your health since it increases concentration, memory, empathy, and communication abilities. It can help you live longer by reducing stress...
Go to mobile version