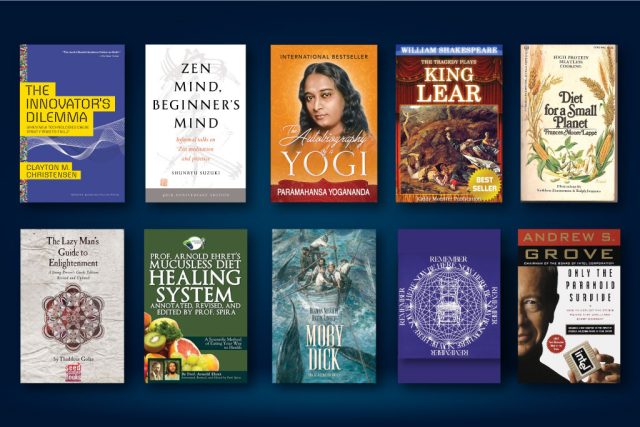 The Innovator’s Dilemma by Clayton Christensen

The book is the revolutionary business book. It has forever changed corporate America. Based on a truthfully radical idea, that a great company can fall precisely as they do everything right, this Wall Street Journal, Business Week, and New York Times Business bestseller are one of the most provocative and important business books ever penned. But unfortunately, entrepreneurs, managers, and CEOs ignore its wisdom and warnings at their peril.

In the forty years since its original publication, the book has become the great modern spiritual classic, much beloved, much reread, and much recommended because the author demonstrates the basics, from the details of posture and breathing in zazen to the perception of nonduality in a way that is not only incredibly clear but also resonates with the delight of insight from the first to the last page.

Autobiography of a Yogi by Paramahansa Yogananda

Autobiography of a Yogi is a beautifully written account of an extraordinary life and a profound introduction to the ancient science of Yoga and its time-honored meditation tradition. This acclaimed autobiography presents a fascinating portrait of one of the significant spiritual figures of our time. With engaging candor, eloquence, and wit, Paramahansa Yogananda tells the inspiring chronicle of his life. The experiences of his remarkable childhood, his encounter with many saints and sages during his youthful search throughout India for an illumined teacher, and ten years of training in the hermitage of a revered The author clearly explains the subtle but definite laws behind both the ordinary events of everyday life and the extraordinary events commonly termed miracles.

Shakespeare’s King Lear inquires us about the magnitude, intensity, and sheer duration of the pain it represents. Its figures harden their hearts, engage in violence, or try to alleviate the suffering of others. The play tells us about families struggling between greed and cruelty, on the one hand, and support and consolation, on the other. Emotions are extreme, magnified to gigantic proportions. Yet, we also see old age portrayed in all its vulnerability, pride, and wisdom, and one reason this most devastating of Shakespeare’s tragedies is also perhaps his most moving.

Diet for a Small Planet by Frances Moore Lappe

The extraordinary book that taught America the social and personal significance of a new way of eating is still a complete guide for eating well in the twenty-first century. Sharing her evolution and how this groundbreaking book changed her life, world-renowned food expert Frances Moore Lappé offers an all-new, even more fascinating philosophy on changing yourself and the world by changing the way you eat.

Warning! Many of the foods that YOU thought to be Safe and Healthy are Creating SLIME inside YOUR BODY! Discover The Simplest and Most Powerful NATURAL lifestyle secret that has IMPROVED the lives of THOUSANDS! This book is Annotated, Revised, and Edited by Prof. Spira contains one of the most profound revelations of the 21st century, that mucus-forming foods are unnatural for us to eat and are the definite cause of many human illnesses. But how can you eliminate these foods and cleanse the body from their waste? This book has everything. You need to Know to Instantly begin Cleansing the Body and Gaining a NEW Lease on Life!

“One of the great strengths of this third edition is Hershel Parker’s inclusion of commentary on Moby-Dick from its publication in 1851 right into the 21st century to answer why Moby-Dick, boisterous, beautiful, filled with soaring language, forever questioning. Nearly 200 years old is more popular than ever.” – MARY K. BERCAW EDWARDS, the University of Connecticut read by more than 12 million students over fifty-five years; Norton Critical Editions set the standard for apparatus that is right for undergraduate readers. The three-part format of annotated text, contexts, and criticism helps students understand, analyze, and appreciate the literature while opening a wide range of teaching possibilities for instructors. Whether in print or digital format, Norton Critical Editions provides all the resources students need.

The Lazy Man’s Guide to Enlightenment by Thaddeus Golas

A bit lighter than other spiritual guides on the list, this “underground classic” is built around simple steps a person can take to live a more conscious and joyful life. The author, a noted philosopher and self-proclaimed “lazy man” who hung around San Francisco in the 1960s, emphasizes that spiritual development doesn’t have to be the grueling process of discipline and self-denial that it’s sometimes made out to be.

Be Here Now by Ram Dass

This book describes one man’s transformation upon his acceptance of the principles of Yoga and gives a modern restatement of the significance of the spiritual side of man’s nature. It illustrates Mr. Jobs’ enthusiasm for Eastern spirituality was a defining aspect of his worldview, and Be Here Now is another seminal text that enabled the popularization of Yoga and meditation in the West. Ram Dass, an American-born academic who had a spiritual awakening after experimenting with LSD, inspired Jobs to visit India and try LSD himself.

Only the Paranoid Survive by Andrew S. Grove

Under Andy Grove’s leadership, Intel became the world’s largest chip maker and one of the most esteemed companies. In Only the Paranoid Survive, Grove informs his strategy for measuring the nightmare moment every leader dreads when massive change occurs, and a company must, virtually overnight, adapt or fall by the wayside in a new way. Mr. Grove calls such a moment a Strategic Inflection Point, which can be set off by almost anything: mega-competition, a change in regulations, or a seemingly modest change in technology. Grove underscores his message by examining his record of success and failure, including how he navigated the events of the Pentium flaw, which threatened Intel’s reputation in 1994, and how he dealt with the explosions in the growth of the Internet. The work of a lifetime, Only the Paranoid Survive, is a classic of managerial and leadership skills.

The InCAP Desk - August 4, 2022 0
1. Night by Eli Wiesel A brutal and blistering account of its writer’s experiences as a Jewish prisoner in the Nazi death camps, Night gained...
Go to mobile version