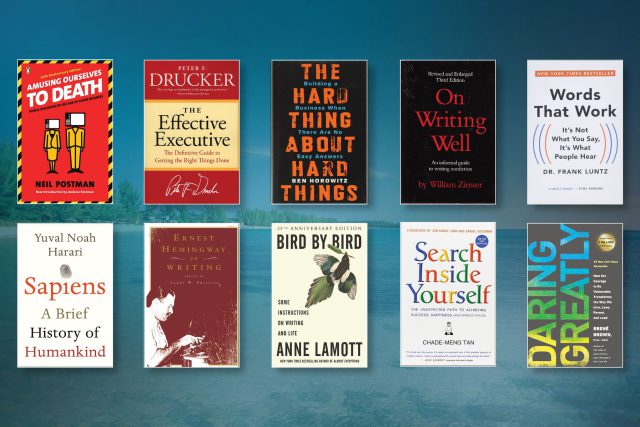 A world-famous historian has written a ground-breaking account of humanity’s origins and evolution that analyzes how biology and history have shaped us and improved our grasp of what it means to be “human.” At least six different species of humans lived on Earth a hundred thousand years ago. However, Homo sapiens is the only one left today. So how did the others fare? And what might occur to us? Dr. Yuval Noah Harari deviates from the norm with this highly original book, which started around 70,000 years ago with the emergence of modern cognition. Most books about the history of humanity pursue either a historical or a biological approach.

What happens when politics and the media are used as entertainment? The importance of Neil Postman’s important introduction to modern media is greater than ever as our world starts to resemble Orwell’s 1984. It has been regarded as a twenty-first-century book written in the twentieth century about the damaging impact of television on our politics and public dialogue. With increasingly advanced electronic media like the Internet, cell phones, and DVDs, television has gained even more relevance. Amusing Ourselves to Death is a prescient look at what occurs when entertainment demands are placed on politics, journalism, education, and even religion.

Ben Horowitz, the co-founder of Andreessen Horowitz and one of the most well-known and successful businessmen in Silicon Valley, provides crucial guidance on establishing and managing a firm as well as practical counsel for handling the most challenging issues that business school doesn’t touch. Few people are honest about how tough it is to run a business, even if many people rave about how wonderful it is to start one. Ben Horowitz examines the daily issues managers face, offering the knowledge he has gathered from creating, running, purchasing, selling, investing in, and managing technology companies. He amplifies business lessons using lyrics from his favorite songs, saying it is about everything from poaching competitors to dismissing friends, establishing and maintaining a CEO mentality, and knowing when to cash in.

Daring Greatly
How the Courage to Be Vulnerable Transforms the Way We Live, Love, Parent, and Lead
Brené Brown

Brené Brown, Ph.D., MSW, debunks the popular notion that vulnerability equals weakness and makes the case that it serves as our most reliable indicator of bravery based on twelve years of groundbreaking research. According to Brown, vulnerability is the foundation of tough feelings like fear, sadness, and disappointment and the source of positive emotions like love, belonging, joy, empathy, innovation, and creativity. “When we cut ourselves off from vulnerability, we disconnect ourselves from the events that give our lives meaning and purpose,” the author says. Not winning or losing is the point of Daring Greatly. It concerns bravery. Vulnerability is subversive in a society where there is “never enough,” and being terrified is commonplace.

Search Inside Yourself
The Unexpected Path to Achieving Success, Happiness (and World Peace)
Chade-Meng Tan

With Search Inside Yourself, Chade-Meng Tan, a pioneer in personal growth and one of Google’s first engineers, provides a tried-and-true technique for boosting mindfulness and emotional intelligence in daily life and the workplace. Meng’s role at Google is to impart mindfulness practices to the brightest employees on how to use them both at work and otherwise. Readers all over the world can get exclusive access to one of the most sought-after courses in the nation, a course in creativity, health, and happiness that enhances the well-being and output of the people in charge of one of the most prosperous businesses in the world. In fact, it is a priceless manual for realizing your full potential.

The book, which evolved from a course William Zinsser gave at Yale, has received accolades for its wise counsel, clarity, and friendly writing style. It is a book for everyone who wishes to learn how to write or who, as practically everyone does, needs to write to get through the day. On Writing Well provides you with both fundamental concepts and the insights of a renowned practitioner, whether you wish to write about people or places, science and technology, business, sports, the arts, or even yourself in the increasingly popular memoir genre. This book has endured and continues to be a valuable tool for authors and would-be writers, with over a million copies in print.

Bird by Bird: Some Instructions on Writing and Life
Anne Lamott

Bird by Bird is a contemporary classic and necessary book for future generations of young and old writers. For many years to come, this 25th-anniversary edition will inspire imaginative thinking. More than a million readers, writers, and scribblers of all ages and skill levels have been motivated by Anne Lamott’s amusing, kind, down-to-earth counsel for the past 25 years. Advice starts with the specific words of knowledge that Anne’s father, who was also a writer, passed down to her in the famous phrase that gives the book its title: “Thirty years ago my older brother, who was ten years old at the time, was trying to get a report on birds written that he’d had three months to write. It was due the next day.”

From one of the greatest American writers of the 20th century, the book is a collection of observations on the nature of writing and the writer. Hemingway frequently discussed writing in his books and short stories, in letters to editors, friends, fellow writers, and reviewers, in interviews, and specially commissioned pieces on the subject. In this book, Hemingway offers his observations on the nature of the writer and on aspects of the writer’s life, as well as concrete suggestions for authors on how to improve their writing, discipline, and work habits. Hemingway’s overall intelligence, wit, humor, and insight are evident, as is his stress on the honesty of the writer and the writing profession.

Peter F. Drucker reminds us is the ability to get the right things done. This usually involves doing what other people have overlooked and avoiding what is unproductive. Intelligence, imagination, and knowledge may all be wasted in an executive job without the acquired habits of mind that mold them into results. Drucker identifies five practices essential to business effectiveness that can, and must, be learned. Managing time Choosing what to contribute to the organization Knowing where and how to mobilize strength for the best effect Setting the right priorities Knitting all of them together with effective decision-making Ranging widely through the annals of business and government, Peter F. Drucker demonstrates the distinctive skill of the executive and offers fresh insights into old and seemingly obvious business situations.

WORDS THAT WORK: IT’S NOT WHAT YOU SAY, IT’S WHAT PEOPLE HEAR
Frank I. Luntz

The leading communications specialist in the country imparts his knowledge on how the words we use can alter the nature of business, politics, and daily life in this nation. Luntz provides a behind-the-scenes look at how the strategic use of words and phrases influences what we buy, whom we vote for, and even what we believe in Words That Work. He explores the significance of word choice in chapters like “The Ten Rules of Successful Communication” and “The 21 Words and Phrases for the 21st Century.” Frank Luntz is the best person to explain because he has helped more than two dozen Fortune 500 firms develop by using his grasp of words.

The InCAP Desk - October 8, 2022 0
The Innovator's Dilemma by Clayton Christensen The book is the revolutionary business book. It has forever changed corporate America. Based on a truthfully radical idea,...
Go to mobile version