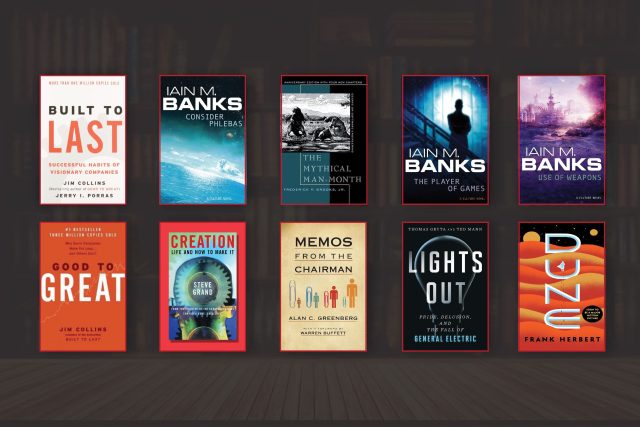 “This book does not focus on visionary leaders with charm. It has nothing to do with futuristic product ideas, futuristic goods, or futuristic market insights. It also goes beyond simply having a company vision. Instead, this book is about something more significant, lasting, and substantial. This book is about forward-thinking businesses.” In this ground-breaking book, Jim Collins and Jerry Porras dispel myths, offer fresh perspectives, and provide helpful advice to individuals who want to create iconic businesses that withstand the test of time.

The Player of Games
Iain Banks

Gurgeh is among the best game players out of The Culture, a human/machine symbiotic civilization. Morat Gurgeh Jernau, The game’s player master of all games, computers, and tactics. Gurgeh, who has succeeded, visits the harsh and opulent Empire of Azad to participate in their fantastic game, which is so complicated and similar to life itself that the victor becomes emperor. Gurgeh accepts the game and, with it, the challenge of his life, and very likely his death, after being mocked, blackmailed and nearly murdered. Iain M. Banks has received praise for his works being “poetic, hilarious, perplexing, horrifying, and sensual,” among other qualities.

The book introduces readers to the utopian assemblage of human and extraterrestrial cultures that probes the ethics of war and the boundless potential of human imagination. All around the galaxy, the conflict raged. Billion after billion have already perished and were doomed. Moons, planets, and even stars faced ruthless, violent, and worse, arbitrary devastation. The Culture fought for its moral right to exist, while the Idirans fought for their Faith. There were issues of principles. There was no surrender possible. Both the Culture and the Idirans desired it. Horza, the Changer, and his ragtag band of capricious human and mechanical mercenaries found it, which led to their demise.

The Mythical Man-Month is one of the few publications on software project management that has been as influential and timeless. Fred Brooks advises on anybody managing complicated projects with a combination of information about software engineering and provocative viewpoints. These writings are based on his work managing projects for the vast OS/360 software system and the IBM System/360 computer family. Twenty years after the book’s first release, Brooks has revisited his original ideas and provided fresh perspectives and recommendations for readers who are already familiar with his work and learning about it for the first time.

Use of Weapons
Iain M. Banks

One of the most powerful Special Circumstances operatives, Cheradenine Zakalwe, changed the course of worlds to suit the Culture through deceit, shady dealings, and military action. He had been rescued from obscurity and propelled to his current prominence by the woman known as Diziet Sma, but despite all their transactions, she did not know him as well as she believed. Both of these individuals were acquainted with Skaffen-Amtiskaw, the drone. It had once killed the woman’s assailants extremely violently, saving her life. It considered the man to be hopeless. However, not even its computer could see the atrocities in his history. Indeed, the use of Weapons is a masterwork of science fiction.

Today, humanity can create actual artificial life, realizing Dr. Frankenstein’s vision in both cyberspace and the physical world. In this book, the leading proponent of artificial life, Steve Grand, offers the first authorized and thorough tour of the boundaries of this developing new creation. He examines what has been accomplished thus far and future prospects for creating intelligent, autonomous, and even aware living entities. He addresses a wide range of fundamental queries, including: What is life? What should these new life forms’ bodies, thoughts, and brains look like? What are the essential philosophical principles and computational frameworks? This incredibly approachable and thought-provoking book’s core is the author’s creative vision, founded on his expertise in creating some of the most cutting-edge artificial life on the market.

Ace Greenberg excelled in practically all of life’s essential activities, including arbitrage, magic tricks, dog training, and bridge, all of which I lack. Warren Buckett The financial world knew Alan C. Greenberg, a renowned philanthropist and former Chairman of Bear Stearns, for his incisive, eccentric, but priceless notes. Greenberg’s MEMOS FROM THE CHAIRMAN is a unique and singularly straightforward management concept that has been embraced by everyone from Warren Buffett to Jeff Bezos to Tom Peters. He elaborated on running your company with the most outstanding moral standards possible. Your bright, motivated staff should be released from the line of authority. Always be quick and polite while returning calls. Never mistake the smell of your own body for perfume. And continue to be modest.

Lights Out: Pride, Delusion, and the Fall of General Electric
Thomas Gryta

For many years, the book provided top managers with secure employment, a sound investment, and a top-notch business education. Few firms have ever been as deeply interwoven into the American social paradigm as GE, which powered everything from lightbulbs to turbines and electrified America. GE began the twenty-first century as the most valuable firm in the country following two decades of leadership under the iconic CEO Jack Welch. Lights Out looks at how Jeff Immelt, Welch’s hand-picked successor, stumbled into his own faults while attempting to solve Welch’s profit machine’s weaknesses. In the end, GE’s long-standing culture of “win at all costs” seemed to lose focus, leading to the company’s personal and organizational deterioration. Lights Out explains how one of America’s greatest businesses became a lesson for the present.Lights Out details how one of America’s all-time great companies has been reduced to a cautionary tale for our times.

Collins’s 21-person research team read and coded 6,000 articles over the course of a five-year effort, produced more than 2,000 pages of interview transcripts, and generated 384 gigabytes of computer data in quest of the secrets of greatness. The results will surprise many readers and, to be very honest, offend some.

The legendary work of art by Frank Herbert is a triumph of the imagination and one of the best-selling works of science fiction ever. The novel Dune is set on the desolate planet Arrakis. It tells the tale of the young Paul Atreides, the royal family heir, who is burdened with controlling a hostile world where the only valuable item is the “spice” melange, a stimulant that may lengthen life and elevate awareness. Melange is a reward sought across the known cosmos and worth dying for. However, the murder of Paul’s family when House Atreides is betrayed will send the young man on a journey toward a destiny far more significant than anything he could have ever dreamed.

The InCAP Desk - March 3, 2022 0
Reading is beneficial to your health since it increases concentration, memory, empathy, and communication abilities. It can help you live longer by reducing stress...
Go to mobile version