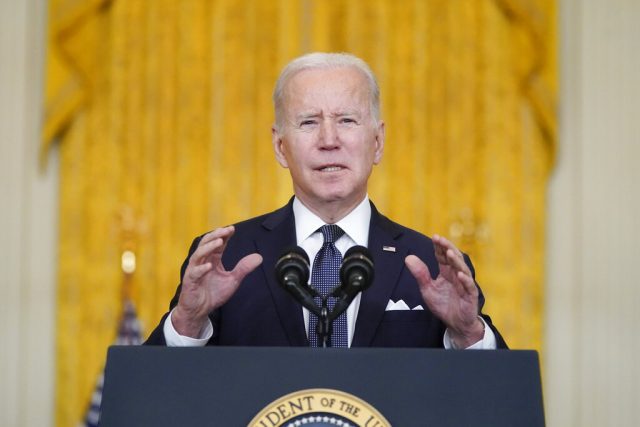 US President Joe Biden has warned that Russia could launch an attack on Ukraine. He reiterated that the United States was ready to impose sanctions on Russia if it attacked. But Biden acknowledged that ordinary people in the United States must also suffer. He made the remarks in a televised address from the White House on 15th February 2022. So, Ukraine Still in Danger: Biden.

Recently, Western tensions with Russia erupted over the deployment of Russian troops on the Ukrainian border. Russia claims to have deployed millions of troops along the Ukrainian border. As a result, Moscow could attack the country at any time. In a statement issued Friday, Russia has denied the allegations stating, “Similar, baseless allegations concerning Russia’s intelligence have been made more than once. They say the army has been deployed as part of a military exercise. On the day, Russia’s defense ministry said that it had withdrawn some troops, signaling that tensions would ease.

However, Biden noted that Russia’s claim had not been verified. He spoke in support of the US Alliance but said that maintaining some independence was not the answer. We have not confirmed whether the Russian military units are returning to their bases. However, our analysts suggest that they (the Russian military) are still in a threatening position. “

The president said the United States would impose sanctions on Russia if it attacked Ukraine. And it will disrupt energy supplies to the United States and affect the US economy. Biden claims that even if ordinary Americans suffer, they will accept it. He said the American people know that democracy and the protection of freedom cannot be guaranteed by itself.

Ukraine said on the day it had received cyber-attacks on its defense ministry website and two banks. The cause of the attack was not immediately known. There have been major attacks on Ukraine’s online infrastructure in the past. The country then blamed Russia for the attack.

There is another concern about Russia over the Ukraine issue in the Western world. It is feared that Russia may take relatively small steps to destabilize Ukraine, even if it does not launch a full-scale attack. As part of this, cyber-attacks are feared in crucial areas of Ukraine. Biden said that the United States was ready to respond to any such move.

Russian President Vladimir Putin has repeatedly said he has no plans to invade Ukraine. Russia does not want another war in Europe. Biden says he agrees with the Russian government’s offer to continue diplomacy.

Earlier, US intelligence indicated that Russia could launch an attack on Ukraine anytime. Therefore, Ukrainian President Volodymyr Zelensky has declared the day a “day of unity.” He called on the people to fly the country’s flag and wear red and blue (the national color of Ukraine) ribbons.

Germany to Provide Over 1bn Euros’ Military Aid to Ukraine

The InCAP Desk - April 16, 2022 0
The German government said that it will provide more than a billion euros in military aid to Ukraine, despite Kyiv's objections that it is...