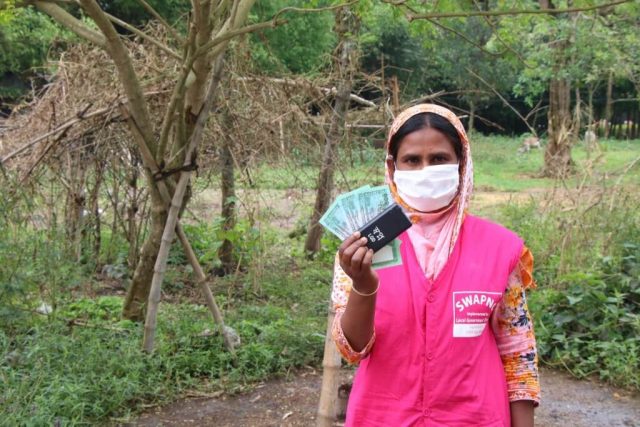 Marzina Begum had only Tk377 in it. She counted the money for the fourth or fifth time, but the total remained the same. Finally, she couldn’t decide whether to pay off her debt, buy groceries, or put money toward her son’s college tuition. Indeed, Project SWAPNO Empowering Rural Women.

An announcement of a job opening over the PA system brought her back to reality. She learned that the local government division’s SWAPNO (Strengthening Women’s Ability for Productive New Opportunities) project was looking for public asset maintenance workers in her neighborhood, Lalmonirhat. So she went to the Union Parishad right away and signed up for the local government’s public works program.

It has been implemented in 22 Bangladeshi districts, benefiting 64,980 people. “Three years ago, my husband died, leaving three children. Who will feed me if I avoid working in public during this pandemic? I tried to create a little food store at home, but I didn’t have the funds. So as a result, I joined SWAPNO and started working for Tk200 a day,” Marzina said.

She hasn’t had to look back since 2020. She received Tk150 in cash every day for 15 months, with Tk50 going to ROSCA (Rotating Savings and Credit Associations), a SWAPNO informal savings structure, in her name as savings. As a result, she managed to save Tk18,300 in just over a year and a half.

She used the money to buy two goats and started raising them. The initiatives usually span 12 to 18 months and significantly reduce costs, and she had leadership, women’s rights, health, and nutrition training.

“I worked and trained at the same time. It provided me, my business, and other women like me a fresh lease on life. Other SWAPNO members and villagers sell their produced veggies to me at wholesale prices in a part of my grocery shop now known as SWAPNO corner, “Marzina, a self-dependent woman, said.

Marico Bangladesh is delighted to be associated with SWAPNO and play a role in developing persons like Marzina. SWAPNO began as a trial project in 2014, but Marico Bangladesh decided to make it a core initiative in 2018 since it can alter the lives of rural women. “We joined because it aligns with our company’s concept of ‘making a difference,” said Christabel Randolph, Marico Bangladesh Limited’s Director of Legal and Corporate Affairs.

“It is a component of our company’s philosophy. We focus on a specific area such as gender, education, and community sustainability when we run a CSR project, and SWAPNO meets our criteria,” Christabel elaborated. She went on to say, “When we first heard about SWAPNO, it caught our curiosity, and we knew we wanted to be a part of it. Marico Bangladesh has pledged to put 1% of its income into corporate social responsibility projects. And we’re delighted it’s given women a voice.”

Irani, another project recipient, remembered her childhood in Jamalpur “When my husband returned home drunk, he used to beat me every night. He was an alcoholic who frequently abandoned our three children and me. For the sake of my children, I had to go through a lot, but now I am self-sufficient.”

After completing SWAPNO’s program, she decided to divorce her husband and open her vermicomposting facility. She also runs a nursery. She usually utilizes organic fertilizer in her nursery and sells the rest to local markets. As a result, her monthly salary has increased to roughly Tk15,000 presently.

Marico Bangladesh intends to work with this program for as long as the opportunity exists. “Almost every firm nowadays is involved in CSR (Corporate Social Responsibility) and is attempting to address societal challenges. However, we feel that collaborating with the government to organize CSR programs will help solve more problems in the long term, and we are on the right track. In addition, we have contributed BDT 5 million to the Prime Minister’s Welfare Fund to assist the government in combating the ongoing pandemic”, Christabel concluded.

The InCAP Desk - August 28, 2022 0
Romo Rouf Chowdhury has been elected as Chairman of Bank Asia Ltd., in the 479th meeting of the bank's Board of Directors held on...
Go to mobile version