Home Editorial Wealth of The Top Rich Has Shrunk 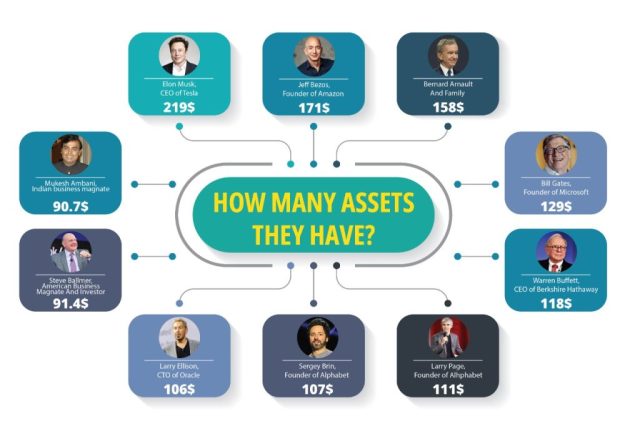 The number of billionaires and their wealth in the world have decreased. This information has come up in the list of the richest people in Forbes magazine published in 2022. The report says the wealth of the top rich has dwindled due to two years of the COVID Pandemic and the recent Russia-Ukraine war. This year’s list includes 2,668 people, 87 less than last year, 2021. Their total assets stood at twelve lakh and seventy thousand crore dollars, $40,000cr less than 2021. The editorial is about Wealth of The Top Rich Has Shrunk.

Elon Musk, CEO of Tesla, will be crowned in 2022. In the last two years, his fortune has grown exponentially. According to the report, he is working to change how the earth and the universe are transported radically. On the one hand, by bringing electric cars through Tesla, he has become the leader of eco-friendly transportation. He is also building rockets through the SpaceX company. He owns 21 percent of Tesla. On the other hand, he recently made a splash by announcing the purchase of a 9.2% stake in social media Twitter. He will soon join Twitter’s board of directors.

Second on the list is Jeff Bezos, founder of the online marketplace Amazon. He founded Amazon in 1994. But in 2021, he sold 880cr dollars worth of Amazon’s shares. He then resigned as chief executive and became executive chairman. However, there are allegations that workers in Amazon warehouses have to work in inhumane conditions. He has had to answer to the US Senate for that.

Only Mukesh Ambani, Chairman of India’s Reliance Industries, is among Asia’s top 10 richest people. Reliance has businesses in the petrochemical, oil, gas, and telecom sectors. In the last few years, his telecom empire has flourished a lot. Moreover, Facebook and Google have invested in his Reliance. As a result, his wealth has increased significantly in the last two years.

This time the Russian rich have been hit the hardest. Russia is now embroiled in many international sanctions over its war with Ukraine. As a result, the number of their rich has decreased a lot. This time the number of rich Russians on the list is 34 less than last time. The number of Chinese has also decreased by 6. There are, of course, different events. The list goes down as the Chinese government cracks down on big technology companies.

But the biggest surprise this year has been Facebook CEO Mark Zuckerberg, not in terms of wealth growth but in terms of decline. At one time, he was at the top of the list of top rich people, but this time he has come down to 15th. This is because Facebook has been accused of manipulating people’s information for several years. In addition, he had to answer to the US Senate. As a result of this, Zuckerberg’s wealth has decreased as the share price of Facebook has declined.

According to Forbes, the list is based on these rich people’s stock prices and exchange rates after March 11 this year. As stock prices change, so does the value of their assets. For that, there is an opportunity to see the amount of instant wealth in the list of Forbes.

Romanian Singer Otilia To Make First Ever Appearance in Bangladesh

The InCAP Desk - July 11, 2022 0
Romanian singer Otilia Brumă is all set to perform live in Dhaka, Bangladesh, as part of the launching of the Nokia G21, the latest...
Go to mobile version