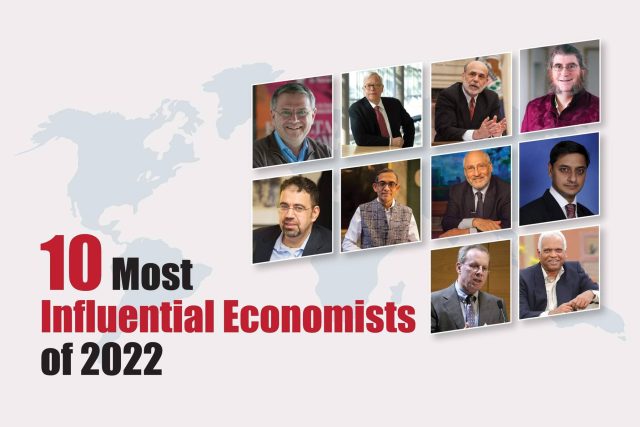 The economy has a considerable impact on the quality of our lives. Early in the 1900s, when the traditional gold standard was in place, the globe was likely experiencing its greatest significant period of economic growth. However, much of the stability of the preceding age collapsed immediately when the whole world was destroyed by the Great War and World War II.

Since that time, the whole economic system has undergone a progressive transformation. Many renowned economists have contributed significantly to changing the rules of the economic game for the better and bringing the global economy to a stable state. Here are the ten influential economists who had a significant social influence.

Please Note: The InCAP offers this list of 10 Most Influential Economists of 2022. It’s an analysis of the International Corporate Association of Professionals (InCAP), so there is no opportunity for debate centering on this ranking.

These subfields of game theory are concerned with designing mechanisms or institutions that produce socially desirable outcomes in equilibrium. His recent works are Incentive-Compatible Voting Rules with Positively Correlated Beliefs & The Shapley Value as the Maximizer of Expected Nash Welfare.

Mr. Barro is considered one of the Founders of new classical macroeconomics. He is currently a senior fellow at Stanford University’s Hoover Institution and Co-editor of the influential Quarterly Journal of Economics. His work has been central to many economic and public policy debates of the last 30 years, including business cycle theory, growth theory, the neoclassical synthesis, and public policy.

The Research Papers in Economics project ranked him as the fifth most influential economist in the world, as of March 2016, based on his academic contributions. However, he has been an outspoken opponent of stimulus spending, calling Obama’s stimulus bill “garbage” and “the worst bill since the 1930s.

Mr. Sanjeev Sanyal is an internationally acclaimed economist, bestselling writer, environmentalist, and urban theorist. He is regarded as one of Asia’s leading economists and was Deutsche Bank’s Global Strategist and Managing Director until 2015. He is a member of the Economic Advisory Council to the Prime Minister of India and has helped prepare six editions of the Economic Survey of India starting in 2017.

His works included Land of the Seven Rivers, The Incredible History of India’s Geography, The Ocean of Churn, India in the Age of Ideas and others. In addition, heis an occasional columnist for the Hindustan Times, Project Syndicate, The Economic Times, Live Mint, Business Standard, and several other publications.

Joseph Eugene Stiglitz is an American New Keynesian Economist, a Public Policy Analyst, and a full Professor at Columbia University. He is a former Senior Vice President and Chief Economist of the World Bank.

Along with his technical economic publications (over 300 technical articles), Mr. Stiglitz is the Author of books on issues from patent law to abuses in international trade. Some of his works are Whither Socialism?, Globalization and Its Discontents, Freefall, Measuring What Counts; The Global Movement for Well-Being, and others. In 2011, he was named by Foreign Policy magazine on its list of top global thinkers.

His publications include Volatility And Growth, Understanding Poverty, Poor Economics: A Radical Rethinking of the Way to Fight Global Poverty, etc. However, His book, Good Economics for Hard Times: Better Answers to Our Biggest Problems, provides a grounded approach to tackling today’s most pressing global problems, focusing on alleviating inequality and poverty.

Mr. Acemoğlu is a Turkish-born American Economist who has taught at the Massachusetts Institute of Technology since 1993. He is currently the Elizabeth and James Killian Professor of Economics at MIT. He was named Institute Professor in 2019. However, he is widely considered a prospective Nobel laureate in Economics.

He is a fellow of the United States National Academy of Sciences, American Academy of Arts and Sciences, Econometric Society, European Economic Association, and other learned societies. Also, he is a Research Associate at the National Bureau of Economic Research and a Senior Fellow at the Canadian Institute for Advanced Research. He was the Editor of Econometrica, an academic journal published by the Econometric Society, from 2011 to 2015.

Mr. Dybvig is the Boatmen’s Bancshares Professor of Banking and Finance at the Olin Business School of Washington University in St. Louis. He specializes in asset pricing, Banking, Investments, and Corporate Governance. He was formerly a Professor at Yale University and Assistant Professor at Princeton University.

Also, he was confirmed for a second term as Chairman on January 28, 2010, after being re-nominated by President Barack Obama, who later referred to him as “the epitome of calm.” In his book, The Courage to Act, he wrote about his time as Chairman of the Federal Reserve, in which he revealed that the world’s economy collapsed in 2007 and 2008.

Mr. Heckman has devoted his professional life to understanding the origins of major social and economic problems related to inequality, social mobility, discrimination, skill formation, and regulation and to devising and evaluating alternative strategies for addressing those problems. His work is rooted in economics, but he actively collaborates across disciplines to get to the heart of major problems.

For example, his recent interdisciplinary research on human development and skill formation over the life cycle draws on economics, psychology, genetics, epidemiology, and neuroscience to examine the origins of inequality, the determinants of social mobility, and the links among stages of the life cycle, starting in the womb. He has published over 350 articles and 9 books.

Mr. Shleifer is a Professor of Economics at Harvard University. He holds an undergraduate degree from Harvard and a Ph.D. from MIT. Before coming to Harvard in 1991, he taught at Princeton and the Chicago Business School. However, he has published seven books, including The Grabbing Hand, Inefficient Markets, A Crisis of Beliefs, and over a hundred articles.

In addition, Mr. Shleifer is an Editor of the Quarterly Journal of Economics, and a fellow of the Econometric Society, the American Academy of Arts and Sciences, and the American Finance Association. According to RePEc, Mr. Shleifer is the most cited Economist in the world. He makes history in scholarly publishing and applied investing and consultancy.

The InCAP Desk - August 6, 2022 0
Some women were born on the way to success, while others included entrepreneurs who failed before they succeeded. Also, some lead massive companies while...
Go to mobile version