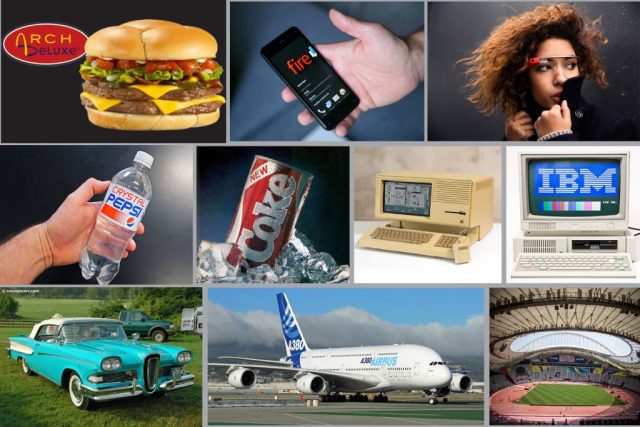 “If a project works for the first time, it was in your nightly dreams,” Cornelius Fitchner said. Every project starts with a single aim or idea and the finest of intentions. However, mistakes are made, communication breaks down, and deadlines and budgets alter as time goes on. Because of these issues, even when projects are launched for the right reasons, 55 percent of organizations fail to complete them. So, this time the InCAP Ranking contains Biggest Failure Projects in The History.

In reality, 17% of large-scale IT initiatives fail so badly that the company’s entire existence is jeopardized. Hence, we have introduced the ten biggest failure projects in the history and the lessons that could look at some project failure instances, including worst-case scenarios, to identify the fundamental cause of the problem and prevent project managers from making the same fatal mistakes.

Please Note: The InCAP offers this list of Biggest Failure Projects in The History. It’s an analysis of the International Corporate Association of Professionals (InCAP). Therefore there is no opportunity for debate centering on this ranking.

The 2019 IAAF World Athletics Championships were the seventeenth edition of the biennial global athletics championship organized by the International Association of Athletics Federations (IAAF), which was rebranded as World Athletics in 2018.

For the World Athletics Championships, the world’s greatest athletes descended on Doha earlier in 2021. But, because the host nation had failed to sell even a fraction of the tickets, they were forced to compete in hauntingly silent stadiums. As a result, IAAF has been chastised for prioritizing financial gain over the requirements of the sport, harming its public image.

Hopefully, lessons have been learned from this instance. First, it doesn’t matter how much money a host nation is willing to throw at an event; if there isn’t a homegrown fan base, they will struggle to fill the seats and provide a memorable experience.

The Fire Phone was Amazon’s first foray into the smartphone industry in 2014; however, it was canceled the following year after only one model. The 3D face scanning technology was the Fire Phone’s significant distinction, but many people thought it was excessively gimmicky. The phone was also only available through American Telephone and Telegraph Company (AT&T), limiting the number of people who could buy it. The majority of consumers said the phone was simply poor and pricey and that spending more to upgrade from their current phones was not worth it. Moreover, its app store is too small. Amazon suffered a $170 million loss when the project was canceled.

The lesson is that a good idea is easy to develop; the execution is complex. Therefore, higher education has to be more flexible, inexpensive, and learner-centered, as we all know. These are simple goals to set but challenging to achieve. Therefore, leaders in any organization should set great purposes and provide significant directions.

The Arch Deluxe was a hamburger created in 1996 by McDonald’s international fast-food restaurant giant and targeted at adults. It was quickly phased out after failing to gain traction despite a significant marketing push and is regarded as one of the most costly flops of all time. McDonald’s spent more than $150 million on advertising for their new Arch Deluxe Burger in 1996, more than it had ever spent on a marketing campaign, only to discover that its customers were not interested in the more sophisticated menu item.

This is yet another example of how important it is to allow consumer data to drive product planning. McDonald’s could have saved millions of dollars in advertising and resources if it had a more accurate picture of what its customer’s desire. Choose a few essential metrics to track, ensure that your tools can accurately measure them in as close to real-time as feasible, and then strategize based on the results.

The IBM PCjr (pronounced- PC junior) was a home computer manufactured and marketed by IBM from March 1984 to May 1985. It was designed as a lower-cost variant of the IBM PC with hardware capabilities better suited for video games to compete more directly with other home computers such as the Apple II and Commodore 64.

To attract home computer users, when IBM released the PCjr, it offered fewer features than its competitors and was twice the price of an Atari or Commodore. After customers complained about the poor quality of the keyboard, IBM offered an alternative that had its own flaws and failed to rekindle interest in the PCjr.

IBM took the right approach when it listened to users and gave them what they wanted: a new keyboard. Unfortunately, its response was insufficient because the product was of poor quality and did not help users improve their experience with the PCjr. When you listen to your market, especially in times of crisis, it’s critical that you respond in such a way that saves your project and inspires even more brand loyalty with delighted customers.

It appeared to be a futuristic device, with voice commands and information displayed directly into your field of vision. Google Glass was introduced in 2012 and was hailed as the future of artificial intelligence. However, it was quickly chastised for its out-of-date design. There were also privacy concerns because Google Glass allowed users to record videos without anyone noticing, leading to its ban in many public places. However, people were unwilling to overlook flaws in exchange for a high price of $1,500 for a product they didn’t want to wear and didn’t believe they needed it. After years of disappointing sales, Google officially discontinued Glass in 2015.

The Glass will be remembered as one of Google’s most egregious product failures. Many things had to go right for Glass to be a hit, and Google got some of them right. Nonetheless, timing may ultimately explain a significant portion of its demise. The market was not ready for the magnitude of disruption that Glass envisioned. It was ahead of its time somehow, but it was also disconnected from its consumer. This costly lesson will be beneficial to Google.

The trend for ‘light’ drinks emerged in the early 1990s. For example, Pepsi introduced Crystal Pepsi in 1992, a clear-colored soft drink that tastes similar to regular Pepsi. Sales were initially strong, owing primarily to the novelty factor, but quickly declined to the point where Crystal Pepsi was withdrawn from the market just two years later.

David Novak, the creator of Crystal Pepsi, as well as Pepsi, made too many assumptions about the product and market demand. The bottlers even told Novak that the drink needed to taste more like Pepsi. But unfortunately, he did not pay attention.

During the project, David Novak was the COO of PepsiCo and didn’t listen when the bottlers told him the Crystal Pepsi flavor wasn’t quite right. He later said, “I learned there that you have to recognize that when people are bringing up issues, they might be right,” So, never allow one-way communication with stakeholders, and never make assumptions. Instead, use everyone’s expertise and double-check statements before accepting them as genuine.

When you’re losing ground to a competitor, it’s tempting to tailor your product to match theirs. In practice, however, this does not always work out. By 1985, Coca-Cola lost market share to rival Pepsi and changed the formula to taste more like Pepsi. Blind taste tests were used to make the decision.

The ads claimed that “the best just got better,” but customers did not seem to like the new Coca-Cola formula. As a result, people did not purchase the new product in the expected numbers, costing the company $4 million in development and a loss of $30 million. The situation made it one of history’s most famous failures. Instead, sales of the rebranded “Coca-Cola Classic” increased significantly, and Coca-Cola returned to the traditional formula.

While Coca-Cola conducted market research, it fell short when assessing customer motivations. Customer input is critical in development, and for your project to succeed, you must have a method for gathering comprehensive customer insight that provides accurate and realistic information.

Apple Lisa is an example of a product that failed to capitalize on a brand new and promising technology. It was the first desktop computer with a mouse, and experts regarded it as one of the most significant developments in this market segment. This technology eventually dominated the market, but Lisa itself failed.

The reason is that the performance is poor at a high cost. People were interested in machines that cost less than the $9,995 that Apple offered, preferring the less expensive IBM PC. Apple lavishly invested in advertisements, but they failed to persuade potential buyers. Instead, it created a new issue: the advertisements promised much more than the product was which did not help overcome people’s reluctance to buy Apple Lisa.

It is critical to keep the product’s price-performance ratio appealing. The same is true for transparency about the product’s features and capabilities; advertisements should never over promise or create unrealistic expectations.

The Airbus A380 was launched in 2007 with high expectations, but just ten years later, they were being sold for nothing more than spare parts. Moreover, the anticipated game-changer caused Airbus to struggle to secure deals with airlines.

The A380 was costly to manufacture, and Airbus’ production teams did not communicate and used disparate CAD programs. This blunder alone cost $6 billion. Furthermore, there was no second-hand market because the planes were too large for any airline to recoup their investment. In 2004, Airbus began assembling components for what they hoped would become the world’s largest passenger plane. Pieces were shipped from Toulouse to the Hamburg assembly site. As the pieces were brought closer together, it became apparent that they would not fit.

Project management teaches us to keep everyone on the same page, even when working across borders and time zones. This should begin with defining the programs and systems that will be used. In addition, the impact of poor internal communication and a business case built on initial sales, taking the second-hand market for granted, are lessons to be learned.

One of the most spectacular project failure examples in automotive history is the Ford Edsel. Before releasing the Edsel, Ford’s team conducted extensive market research; even conducting studies to ensure the car had the right ‘personality’ to attract the ideal customer. They spent ten years and $250 million on research and development, but by the time everything was finished, and the car was unveiled in 1957, Ford had blown its chance. The market had already shifted to compact vehicles, which did not include the Edsel.

The Ford Edsel is the ideal fail project example, demonstrating the importance of speed to market and how even a major brand and product can fail if a project loses velocity. Conversely, poor communication and incorrect deadlines can cause a project to become irrelevant or valuable, let alone thrive.

Paying close attention to resource availability and utilization ensures that project workers are working to capacity and the best of their abilities, creating more accurate project timeline estimates and preventing projects from dragging.

The InCAP Desk - March 31, 2022 0
Have you ever wondered who the highest-paid athletes in the world are? Football players, racers, basketball players, golfers, and so on are all examples....
Go to mobile version